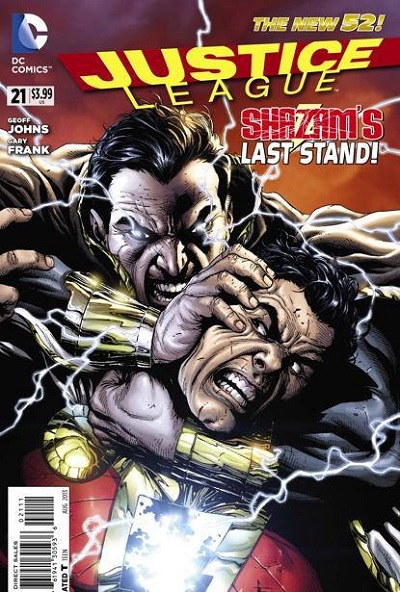 While the quality of the Justice League title has been steadily improving since the Throne of Atlantis crossover, the positive opinions concerning the Shazam backups that have accompanied each issue have had an unyielding and supportive voice each month since they began.  And while this modern interpretation had a shaky start with some, it has since blossomed into a fun and intriguing romp that has shown itself even capable of overshadowing the preceding main story on occasion.  So, for those of us that have been clamoring for Shazam to get his own title, we get the next best thing in the interim; as Justice League #21 sets aside its melodrama of the Big Seven (Titanic Ten?) and turns its focus solely on Billy Batson, Black Adam, the Seven Deadly Sins, and perhaps a few other familiar faces.

Black Adam has been released upon the Earth once again, and now aligned with the Seven Deadly Sins and Dr. Sivana, seeks to reclaim the full extent of the Wizard’s power by forcibly taking it back from Shazam if needs be.  But with such a vast array of forces set against Shazam, can he learn to put aside his self-sufficient pride long enough to win the day?  Or will new threats emerge to keep the scales tipped firmly against this newest hero of the DCU?

As I stated in the first paragraph, there were a few people in arms about this brash interpretation of the previously saint-like Billy Batson.  But those gambits have paid off here as the story comes to its head, allowing a maturation and growth of the character that has been steadily building throughout his backups.  Fully aware that all work and no play makes Shazam a very dull title though, Johns continues to inject natural humor into the story as well, even as the stakes reach a fevered pitch.  It does a great job of breaking up the rising tensions, and really plays well into getting across the notion that this is a child in a hero’s body.  Likewise, the supporting cast play a pivotal role in the story arc as well as this conclusive chapter, and it is great to see more character work done with these theme-important personas to elevate them from cardboard background scenery.  I will state that I was surprised by the finality of this last chapter, as well as the setup for his future endeavors, so it will be intriguing to see if that is handled elsewhere (and more importantly, where it would be handled) should Shazam not find himself a home in the near future.

The artwork by Gary Frank continues to marvel (pun intended), filled to the brim with hyper-detailed rounds of fisticuffs even while putting the majority of his effort into meticulous facial expressions that sell both the emotional and humorous moments of the title.  The backgrounds are great where seen, but were a bit sparse in comparison to the backup chapters he has done.  I know I am excessively spoiled when my only complaint is that I wanted MORE, and I am sure tripling the amount of pages for this chapter of the story made it so something had to give.  Where Frank doesn’t skimp though, is with a few key splash pages, that really capture the majesty and power of the battles our hero has found himself in.  All in all, another stellar chapter from Gary Frank, and it really makes me pine for a monthly Shazam title from his pencil.

Like Shazam?  Buy!  Curious about his little corner of the DCU?  Check it out!  Looking to read about the Justice League like the title is…well, titled?  Pass.  But those of you who meet the first two criteria will find a fun story that really starts to cement Shazam into the current DC Universe.  And really, for the concluding chapter in his introductory backup, it’s hard to ask for much more than that for the character!  (Other than his own title utilizing the current creative team…you know, not much more.)