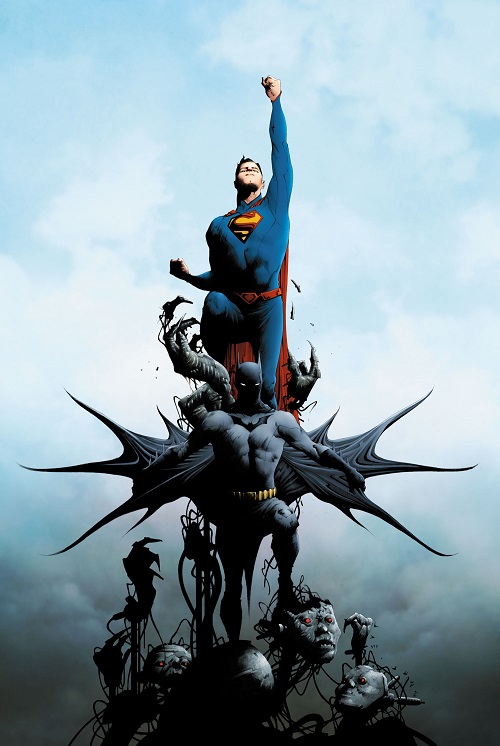 Greg Pak and Jae Lee’s Batman / Superman looks like it is going to be an excellent companion to Scott Snyder and Greg Capullo’s Batman and Snyder and Jim Lee’s Superman Unchained. This new series has started off near the beginning of the New 52 timeline. Both Superman and Batman are still new to the scene, and have yet to cross each other’s paths.

I like that Pak introduced the two characters to each other as Bruce Wayne and Clark Kent, rather than their superhero alter egos. I also enjoyed that their first interaction was not how I would have necessarily expected it to happen. It didn’t feel contrived, and we got a pretty strong idea of who these characters are fairly quickly into the issue.

It is fairly safe to assume that almost all comic book readers know who Batman and Superman are, but if for some chance you did not, you will have an understanding of who they are before the story really kicks off. Pak lets us in on the motivation and drive behind these characters with simplicity that saves time for old readers and catches up new readers, while Jae Lee beautifully shows us through his art. In particular, the first double-page spread does a great job of showing us both the parallels and differences in these two great heroes.

Lee and Chung cover the art for most of the issue, and what they provide is simply stunning. There’s fluidity in the movement of Lee’s lines that is accentuated by the colors and tones from Chung. However, there is some abruptness in art when Oliver and Brown take over from page nineteen. It’s not that their artwork is poor, but it slightly different in style. I can overlook it, because there is an abrupt turn in the story at this point as well. Perhaps it’s an intentional choice by Pak or editorial. Either way, it doesn’t impact my overall enjoyment of the story.

The character work, and art is pretty damn good, but the story is lacking just a little. As I said, I did enjoy it. Obviously it is a number one issue, so it is going to be setting up things, though getting to know a little more about the baddie for this run would have been nice. It’s a small complaint that I can overlook, because I’m really digging on Pak’s character work and the dynamic between Superman and Batman at this early stage.

The lettering is also fantastic, and Rob Leigh really lends a hand in conveying who the characters are through the different typography used for each.

This is a definite buy for me. This far surpasses the two main Superman titles, and is looking to be on par with Superman Unchained and possibly even Batman. It still has that darker DC tone to it, but the contrast in personalities between Bats and Supes should keep it interesting. It’s definitely something we haven’t seen in recent years, as this is exploring that early relationship before mutual trust sets in.