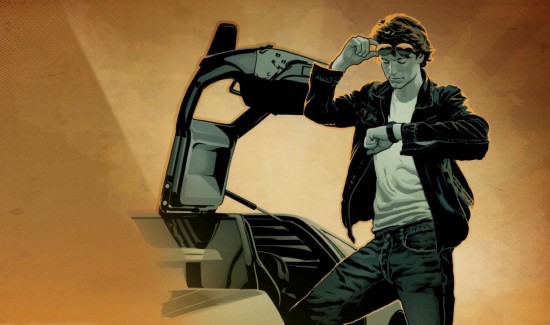 A few years ago I stumbled upon some footage that popped up on YouTube showcasing Eric Stoltz in what was sure to be the biggest part of his career – Marty McFly. One of Hollywood’s not-so-well-kept secrets, Stoltz was hired to play Marty in Back to the Future but was ultimately let go in favor of Michael J. Fox. The rest is history – or is it?

A smaller piece of that tale has come to light in that Bob Gale, the film’s producer, had to let the actress who was to play Jennifer Parker go because she was too tall. That actress was Melora Hardin, who most of us remember as Jan Levinson-Gould on The Office and none of us remember as the lady singing “Begin the Beguine” in The Rocketeer.

Well, filmmaker and writer David Guy Levy has put together a six-issue limited series based on one of the more meta concepts ever derived – what if Gale, who feels horrible about having to fire Hardin, got a chance to put it all right again?

Back to Back to The Future promises to weave that tale. Issue #1, which is being given away for free (as are the second and third issues – subsequent releases will be $2 each) as a PDF here, sets up these two characters as very much living in the world we know. Hardin makes mention of her Monk and Office work. Gale is teaching a class on screenwriting in the opening panels.

Whilst giving an interview to a Back to the Future blogger, he’s reminded of the time he had to “do the hardest thing [he] ever had to do,” which was fire Hardin. The setup that follows is just that – Gale reaches out to make amends, the two share a dinner and then a car ride home – and something happens.

Truth be told, there’s not much in this first issue plotwise, but that’s okay. Establishing two lesser-known people as sympathetic characters (when they have real-world personas) isn’t easy, and Levy does it well. The exposition is there but crafted into believable dialogue, and Spokes’ art conveys realism.. The panels are lush and broad. I wouldn’t consider these splash panels in the traditional sense, but the characters – who are just people, like you and I, remember – are larger than life and fill up the page.

The trap has been set and the con is on – I’m extremely curious as to where this story is going to go when they get back in time. Will Gale and Hardin have to hide from their younger selves? Will Eric Stoltz be any good? Does Michael J. Fox stay on Family Ties for 13 years?

I’m sure these questions and more will be answered, but for now it’s worth taking a look at the issue if for no other reason than it’s free.