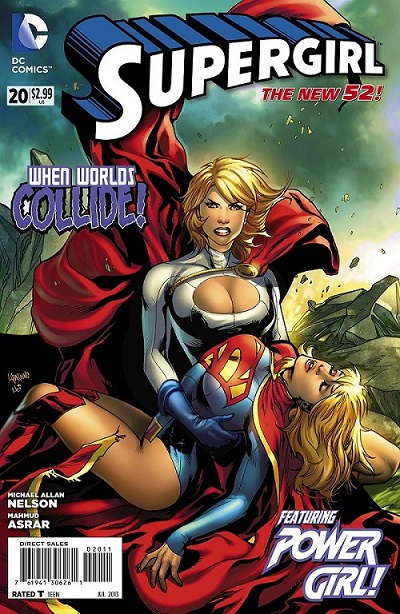 There has been a keen wailing and gnashing of teeth from many critics over the last year, each loudly clamoring that the fun of the DCU has been abandoned by the New 52 Initiative and replaced with the grim and serious (a discussion I am always willing to debate!).  But lo, the clouds did part one Wednesday afternoon, and upon a golden sunbeam did this week’s Supergirl #20 from Nelson and Asrar come drifting down to your LCS; intent on refuting those claims single-handedly.  And how does one issue of one title do just that?  By being so damn fun, while still maintaining an interesting narrative, that you just can’t help but giggle along as you flip each page.  So lets take a look at Supergirl #20!

This issue picks up right where the last left off, with Kara’s underwater Kryptonian base Sanctuary declaring that Power Girl was a clone that must be terminated.  As the two Supergirls of various Earths try to come to an agreement of their own in a squabble of words, the Sanctuary AI decides to take matters into its own hands to determine which Kara is the Not-Kara.  Can the two set aside their differences long enough to overcome the trials placed before them?  And will Supergirl find a way to tackle those threats alone if they cannot?

Michael Allan Nelson takes over writing duties this issue, and brings with him the sharpest dialogue that the title has seen in this volume.  This is not a easy win statement from myself either, as earlier issues of the series have had quite a few entertaining and heartfelt scenes that have kept me going with this title as long as I have.  Where it differs is that Nelson still acknowledges how overwhelmed Kara is in her new life, but at the same time is able to add a level of determination and intelligence to the character that makes it much easier for the reader to cheer her on.  With the fortunate addition of Power Girl as a foil to play against, and the absolutely GLaDOS-esque ramblings of Sanctuary to provide comedic relief through most of the issue, Nelson is able to showcase some seriously strong dialogue that has reinvigorated both the character as well as my hope for more interactions with the world at large.  Not content to just be a light story of fun and frivolity, if my suspicions are correct this issue will also have a lasting effect on the Super-Family as a whole over the coming issues.  Overall, a great balance of everything I need to enjoy an issue.

Asrar continues to develop his skills on Supergirl, delivering his usual stylized yet consistently solid artwork in this issue as well.  Focusing strongly on facial expressions to allow the emotions behind statements to easily be read, it is a style that took me a little time to get used to but has steadily climbed up the ranks of artwork I enjoy.  Given a bit more leeway in panel layouts during action sequences this time around has allowed Asrar to tighten up some of the previous problems I had in earlier sequential battles, and shows a great improvement in delivering scenes that properly convey the scope of the action while maintaining the focus on the characters themselves.

BUY!  You want fun?  Well here it is.  Great characterizations, snappy dialogue, a deceptively amusing antagonist, and artwork that spotlights the positives while allowing the rest to shine.  It’s always exciting to see a new creator come on board a title, but it’s even more fulfilling when that creator brings their own direction that just feels absolutely right from the word go; and that is what we have with issue #20 of Supergirl.