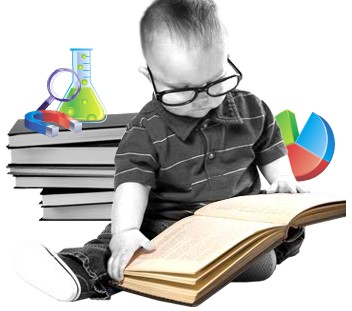 So, it’s been awhile. Sorry about that. Turns out this parenting thing only gets more time consuming as they get older and more aware of everything. The child becomes aware of whether you are looking at him, holding him, feeding him, listening to him, making funny faces for him, in the same room as him. We still call Max “the tiny dictator” because he still lives up to that name. At 6 months old, he now has several new sounds he can make to express his excitement or his displeasure. Almost every hour of the day he’s making a mess either by barfing, pooping, drooling or peeing, sometimes doing more than one at once. It’s all very magical. Not really.

Many times over the past two months I thought about sitting down to write another episode of this column but the words just didn’t come to me. About a month ago, I was having a chat over a beer with my Talking Comics colleague, Bob Reyer, and trying to verbalize my frustration with the lack of material to offer for the column. I realized in that conversation that when I started writing Nature Vs. Nerdture, I was full of questions and curiosity about what was to come on my journey. I am not going to claim I know it all by any means, but I think part of what has been holding me back is that becoming more comfortable in my new role as a mom means that I have far less questions now to explore. I’m working this thing out as I go along and I think I’m doing pretty good at it so far. Which means, I can’t rely on my insecurity or naivete’ anymore to carry me, I’ve got to present this parenting quest to you in a new way and hopefully keep us both intrigued enough to keep this column going.

So, what do parents do when their little bundle of newborn squeaks and squawks starts growing in to a grabby, screaming, giggling, crawling toddler? It’s no longer about ‘how do we do this’ or ‘which (enter baby device) do we use’. Now it’s all about development. Is my baby developing like her baby is? Should he be crawling by now? What percentile is he in for height and weight? Is his head a good shape? Are his coos becoming words yet? Should his motor skills be better? Is he using his hands/feet/head/eyes/tongue enough? Yes, these are all actual questions that parents ask themselves and their doctors at this point.

As a nerdly type, of course I feel a certain need to be assured that my boy is developing well (minimally) or ahead of the curve (ideally). He doesn’t need to be an overachiever just yet, but I’d like him to know the difference between R2-D2 and C-3PO by his 2nd birthday. Is that really too much to ask? So far, Max has been in the 97% percentile for the first six months of his life. In weight and height, that is. So, he’s a portly fella, which I’m told in baby world is not only ok but perfectly healthy and extra cute. We’re hoping he stays that way till Halloween, because he’d make an excellent Stay-Puft Marshmallow Man. He’s rolling, one way. He gets on his belly, then does ‘supermans’ until someone helps him flip over. I’m convinced he’s just more interested in learning to fly than turning himself on his back. He’s got excellent hand control, which he exhibits by tearing out clumps of my hair. And the boy can blow raspberries with bubbles and everything. 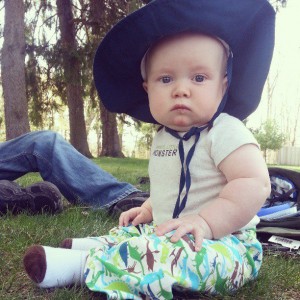 I guess this episode is all about development, for both me and Max. I’ve grown to feel much more relaxed about my new role and about the mistakes that I’ll inevitably make. I’ve developed new skills like doing virtually anything with one hand, changing a diaper in less than a minute, in the dark, and breast feeding in public without exposing a nipple. Both Mr Megan and I have been forced to work on our grasp of time management, compromise and functioning on less than 6 hours of sleep. Emotionally, I’ve already learned to care less about what other people think of my skills as a parent but to care more about how other people feel, in general. I cry a lot more than I used to, and not just when the animals die in the movies. The real development is a three person collaboration, bending to accommodate each other in this new and complex unit. It’s challenging, incredibly rewarding and painfully frustrating all at once.

As usual, I would love to hear from the Talking Comics readers about your personal developments, in parenthood or otherwise. Sharing all the craziness on my road to mommyhood with you all is even more fun when I can learn from you. Thanks for reading!