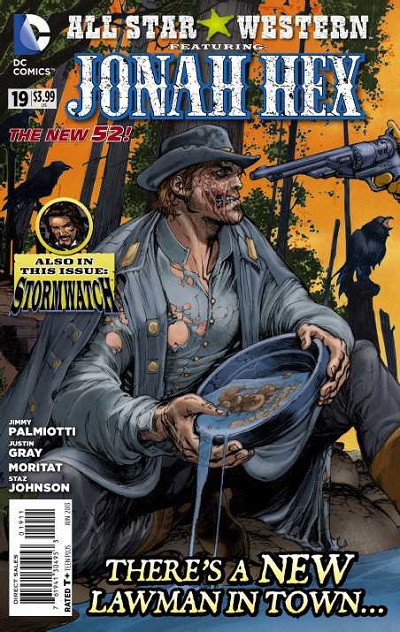 Art by Moritat and Staz Johnson

Say what you will about the Western genre and its role in the modern day, but the 18 issues of All-Star Western that have preceded this chapter have most certainly been a breed of their own since its launch with the New 52 initiative.  Seamlessly interweaving the DC Universe as a whole into the ‘Old West’ motif, the series has handled everything from Gotham’s Court of Owls/Religion of Crime turf wars, the supernatural and otherworldly designs of Eclipso, and the eternal menace of Vandal Savage throughout its run with a simplicity in execution that belies the difficulty of aligning these tales into the setting.  That boundary is pushed even further with this week’s #19, and happily continues its streak in delivering the gruff western campfire tale it sets out to do, even as it faces its most mismatched super-heroic element of the DCU proper to date.

There’s a new sheriff in town.  Literally.  But while he admirably pursues justice in the face of his town’s assault, this new lawman lacks the conviction of his current era to respond in the means necessary to achieve his goals.  Luckily, a chance encounter with Jonah Hex just may provide the grit he needs to resolve his currently impossible situation, and hopefully provide the boost in the arm required to see these criminals brought to justice…if Jonah doesn’t kill him first.  Meanwhile, Adam-One continues his recruitment for the 19’th century iteration of Stormwatch as he tries to bring a mysterious gunfighter into the fold to further his agenda.

I said it last month, and I said it again earlier this week, but I was downright concerned about this title after last month saw Jonah Hex go off on his own and leave his quirky supporting cast behind.  While most certainly a badass in his own right, Jonah has shined the brightest when he has a proper foil to work against, and I believe this issue may have just struck gold in finding the right individual to play that part.  What is most impressive though, is how natural this absurd addition to the cast feels when placed into the 1800’s backdrop due to the interactions he has with Jonah and the rest of the players in this tale.  The dialogue maintains the setting even as the fish out of water blatantly spills the beans about his fantastic situation, providing both the humor and levity that is needed without sacrificing the theme of the title at the altar of what would at first glance look very gimmicky.

The backup concerning the ever-growing ranks of 19’th Century Stormwatch have fast become a favorite of mine (any story with an airship crewed by mummies plotting a presidential assassination using earthquake ray guns will immediately catch my eye), and this chapter brings its tales the closest to normalcy as it has seen to date.  Mind you, that normalcy is a half-vampire gunslinger hunting werewolves on the Texan prairie, but that is without a doubt as tame as this iteration of Stormwatch is designed to be (which should tell you something in itself).  It’s zany, yet still steeped in the myths of the era to a degree that makes its stories both theme relevant, as well as downright fun in watching how far Palmiotti and Gray are willing to push it.

Moritat happily surprised me this issue.  His renditions of Gotham’s bleak period piece skylines and back alleys were absolutely delightful to look at in previous issues, but I was also concerned to see how his skills would translate from the grimy and claustrophobic streets of the cityscape into the vast, bright, and open setting of the American West.  Yet again, my concerns were without merit (something that happens a lot), as he not only delivers an exceedingly appropriate western town for the story told, but his visuals also go a long way in melding the two different worlds presented into a cohesive unit, while subtly pushing the lighter comedic moments without losing a step in the setting.  Johnson’s work in the backup go in the opposite direction for the majority of the tale (but not in quality), providing a detailed and gritty action sequence that delivers an intriguing look at the supernatural elements that roam the western countryside.

I give it a strong buy.  It’s the start of a new arc in the legend of Jonah Hex, and the elements provided will give that little buffer of super-heroic comfort to any who are not sure about picking up a western themed title.  As stated at the top though, this is not a traditional western, and you may just find yourself surprised at how much fun (and relevant) a genre-niche title such as this can be.  Because as someone who had zero interest in Westerns not but a year and a half ago, I can certainly admit that I was.