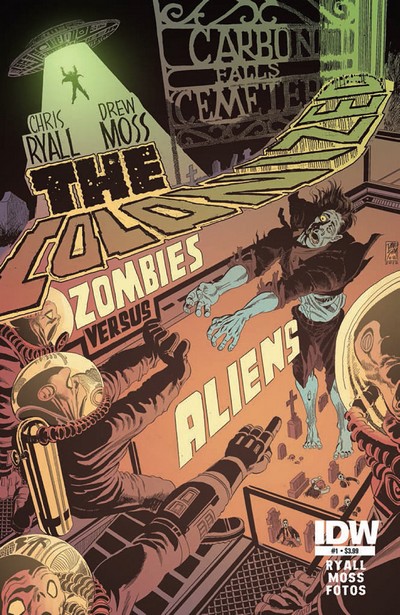 This is the beginning of a new four part series from Chris Ryall and Drew Moss, who worked on Zombies vs Robots together. This one is a very different mood entirely, not to mention this time around we’re looking at aliens vs zombies. Oh yes, this is going to get interesting.

So, here’s the story. A separatist community in Montana is experiencing an infrastructure shake up when their leader dies. Huxley Robertson is mourning the passing of his father but already the local trigger happy ‘good ole’ boys’ are challenging his ability to run the community. He’s spent several years pushing Carbon Falls towards a green existence but some citizens feel his efforts less than valuable. When a huge light is seen falling from the sky, Huxley knows his skills of community management are about to be tested.

Alien explorers decide to check out Earth and scan their space rays over the land around Carbon Falls, hoping to suck a few life forms up to make contact with. They succeed, sort of. The aliens chose to sweep for life in a cemetery and rather than finding it, their technology made it, bringing the corpses back to life. And now we have aliens and zombies descending on the little separatist town, causing shenanigans the likes of which Earth has never seen.

Verdict: Read is digitally first. This issue was definitely good, silly fun and the art is great. It’s a bit early to tell if this series will keep me hooked to the end; it feels somewhat familiar right now. I think that feeling might stem from the artistic style,  which brought Mars Attacks! to mind. So yeah, read it digitally for now. Let’s see where this one goes.