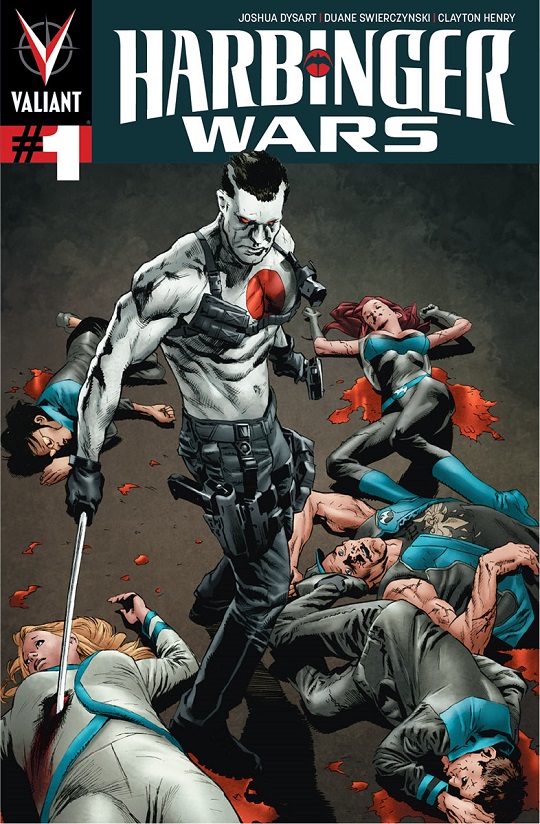 The buildup to Harbiner Wars has been going on for quite a while now (Valiant says since the beginning), but the crossover event is finally here to serve up the action. For the first issue of four in this event it accomplishes a lot in the roughly 30 page issue.

If you are a new reader or someone curious about some of Valiant’s titles, then this is a pretty good place to check out what they have to offer. I’m not just saying that because it’s what Valiant has been saying. For those that need it, there is a recap page that lays out the main players in Harbinger Wars. Valiant and Dysart do a pretty great job of bringing new and established readers up to speed. Several new characters are introduced in the opening pages as well, so no one panic if you see some unfamiliar faces.

In the Bloodshot series we’ve learned that Project Rising Spirit has captured psyiots to use for their own means and ends, and this opening issue introduces a fully trained team of PRS psyiots. I rather enjoyed their scenes in this issue, because they are unknown players and we don’t know where they are going to land on the game board. A few of them have some pretty cool powers as well. I got a good chuckle out of the little girl turning in a giant lion a la Disney’s The Lion King, and munching down some PRS soldiers.

There’s also a lot going on between Peter, Harada, and the bleeding monk. I’ve been a little uncertain of what the monk’s intentions have been. He helped Harada in the past and more recently Peter. Dysart gives us a little bit more insight into the monk’s thought process and purpose. I found it cool, but at the same time all I could think about was the X-men. Psyiots are basically mutants, but instead of coming out to the public they try to keep this crazy stuff secret.

You could look at this issue and think there are four or five points of view happening (Harada, Peter and his renegades, Bloodshot, PRS execs and psyiots). There are a lot of things happening to different groups of people, but Dysart presents it in a way where it really only boils down to two separate divisions in this issue. Everything happening over at PRS focuses around the young team of psyiots there; Bloodshot and the PRS suits are woven in to add to their story and fill in some of the blanks. The same can be said with Peter and his team. Harada appears briefly to remind us that there is an antagonist for this group of renegades. I found it interesting that these two outlying characters, Harada and Bloodshot, are tied together in the end for the issue’s cliffhanger.

Dysart has to juggle a lot of characters around. He is doing a damn fine job at it, while still managing to hit the right beats. The pacing is great, the story makes a great setup for the event, and there is some decent progression to escalate the action next issue.

Also, let’s note that there are three artist on this book. That usually sets off all sorts of klaxons in my head, but in this issue it works. The issue is stylish and polished. It also helps that Reber is the only colorist on the issue, so everything ties together well.

Buy It. I am very impressed with how Valiant is handling this event. Harbinger Wars sets up the event in a fun, well-paced opening issue. It’s only the first issue, but other publishers could take some notes on setting up fun and engaging crossover events. Also, you are getting almost 30 pages for your four bucks (*cough*cough* Marvel). If you are looking for some badassery to keep to entertained, look no further than Harbinger Wars.