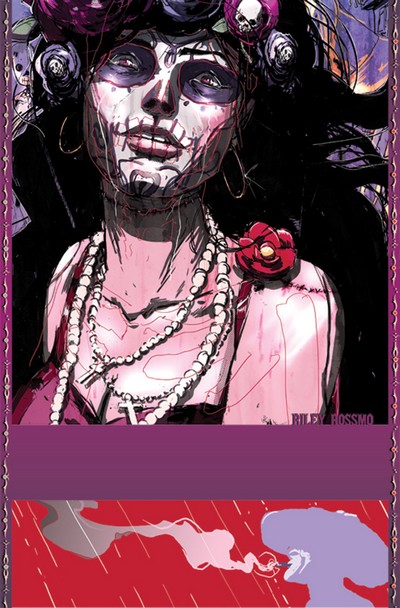 In the second installment of Riley Rossmo’s short stories, all based on the Mexican ‘Day of the Dead’ holiday, we are treated to three fresh takes on what the day brings to three very different characters.

The first is a tale of a man who adores a woman he spots in a crowd; she is recognized by her infectious laugh. He’s visiting a small Mexican town during Day of the Dead celebrations and when he loses track of her, he can’t resist hunting her down. When he puts together the connections of her disappearance to some other girls who have also vanished in the area, he’s led to a face painter he believes knows where Gwen has gone. Not only will this local woman lead him to Gwen, but she will expose him to a less tourist friendly celebration of Dia De Los Muertos.

The Skinny One begins with a solemn, broken child, haunted by violent memories. His face is battered and his fingers crushed. He wanders the town alone, seeking some kind of consolation for his suffering. As we relive his final moments at the hands of a brutal police officer, it becomes clear that this boy is returning to his killer, perhaps hoping to inspire some small amount of remorse in the man. He finds no remorse or sympathy for his loss of life, quite the opposite. The officer clings to a wish for his lost love to return to him, and it’s this wish that will become the ultimate punishment for his sins.

Finally, we meet two brothers on the road to wealth, power and women. They plan to get these doing the dirty work for a horrific gang lord. Gilberto, the older and more experienced gangster, encourages his little brother Gabriel to join him in the gang, pushing Gabriel to prove his commitment to the boss by helping create a morbid display for locals. Once they finish their work they are off to the cemetery to pay tribute to their dearly departed ‘abuela’ or grandmother. Abuela may have one more lesson to teach them after witnessing, from beyond the grave, the boys bragging about their new accomplishments and brutal life styles.

Verdict: Buy this series! Riley Rossmo does some incredible, awfully pretty work here and the individual stories, each with a different writer, are a delight. They are all creepy, dark stories, some more romantic than others. There are only three issues in Dia De Los Muertos, so it’s almost at an end. I think any creation by Rossmo is worth collecting, but these books have been particularly enjoyable.