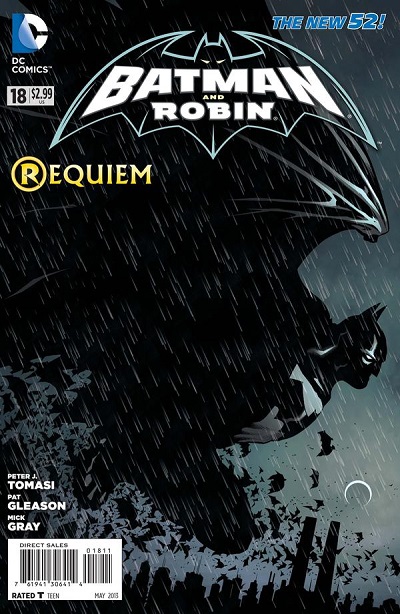 As a voracious reader of prose, and a relative newcomer to comics in the grand scheme of things, I still find myself amazed on a weekly basis by the amount of depth and power that sequential art can bring to the storytelling process.  Previous opinions that my imagination could fill in the mental images with a better clarity than the interpretation of a stranger have since found themselves shattered after my initial foray into this medium, and I am more than willing to fess up to my previous novel-snobbery being incorrectly dismissive.  Transcending the act of just disproving my earlier thoughts are issues like Batman and Robin #18 though; a potent tale told almost entirely through imagery alone, and a chapter that has seen fit to crush my heart within its pages, while relieving itself upon the remains of those beliefs and rubbing my nose into exactly how wrong I could be.

Batman has lost his Robin, and Bruce Wayne has lost his son.  And while both facets of his persona have made a career out of creating contingencies for each and every eventuality, Bruce now must face the harsh truth that there is no conceivable preparation in the world, no matter how fantastical it may be, for a parent to lose their child.  Taking every path he can: clinging to the memories of who he lost, burying the pain in his work, or raging at the universe for its slight; this is a fragment of Bruce Wayne coming to terms with the death of his son Damian.

This issue is powerful.  Tomasi, Gleason, and Gray have come together to create a living and painful graphical representation of sorrow.  Not the sorrow that we feel when we think our lives are not turning out as we planned, or when a relationship turns sour; but the kind of visceral sorrow that only a parent could feel by not only outliving their young child, but also finding themselves an element of their demise.  An inescapable well of grief, rage, and regret; where the only sounds to accompany the anguish are your own guttural cries of despair echoing off of the mental chamber you have locked yourself within.  Yeah.  That kind of sorrow.

While it is nearly impossible to separate the line between what Tomasi and Gleason contributed to this issue singularly, the end result is a beautifully tragic chapter in the life of Bruce Wayne and Batman together.  The meticulous staging of each image as the story progresses act like a dark walk down memory lane, as each and every scene hearkens back to places and events in previous issues, and colors the entire run to date in a veil of sadness as Bruce struggles to process the situation he now finds himself in.  Furthermore, it shows how much preparation and planning went into Tomasi’s run so far, as graphical seeds that were planted issues and issues ago now come to bear their painful fruit.

What can be commented on singularly though, is Gleason’s gripping artwork throughout this chapter of the title.  Doing exactly what needed to be done to make this issue work, Gleason has taken a still life of the vast range of raw emotion that this story tells, captured it within a little box, and transferred it onto the page via his images.  Facial expressions on a single page can tell a story that hours of dialogue struggle to convey in all mediums, and do it in an almost effortless fashion for the reader.  Not to be outdone though, Gray’s ink work enhances each and every emotional detail, bringing into sharp focus the panged expressions of all involved; while Kalisz’s morose colors wash the entire story in a muted shade of grief.  Separately, their work is astounding, but again, together they have created something greater than the sum of their parts.

Buy.  BUY.  If you read, watch, or engage in any stories in search of an emotional response, this is the title for you.  Tomasi, Gleason, and the entire crew on this title have tethered your heartstrings to their puppeteers control bar, and are forcibly pulling you down into the pit alongside Bruce.  I will stop just short of calling it a masterpiece, and that is only because my deadlines have not given me the time to properly process everything in this potent a story, but at the very least I can say it is one of the best chapters I have read during my short tenure in the field…well, ever.  And while I used to incorrectly look down my nose on the medium for stunting the imagination by providing visuals, it is the stirring emotional gravity of something like this that helps prove just how little I know in the world.