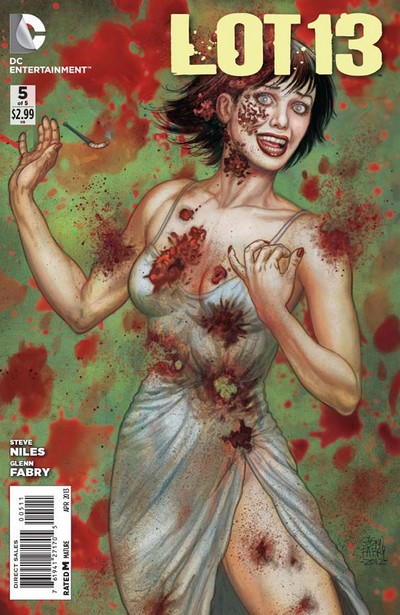 The Nelsons stopped at an empty apartment building during a cross country road trip to their new home. They were tired, hungry and the building supervisor gave them a great deal on a couple apartments for the night. What could possibly go wrong?

The Nelson family are now trapped in this building, which is not an ordinary apartment complex but a truck stop for lost souls. Angry, bitter souls, bleeding from their wounds and repeating their deaths over and over again. “The Judge” rules over this hell house and is excited to welcome new faces. Ron’s family is quickly introduced to their new neighbors and as he struggles to understand what he’s done by bringing his loved ones to this damned place, the locals grow restless. They want blood and life.

Lot 13 has been a hell of a story with a super fun cast of dead characters, each with their own terrible tales. The idea in itself is scary but it’s the ghouls that occupy the building who really make this series such a great creepfest. A gorgeous woman with a gaping hole in the back of her skull. A country folk family, mom, dad and the kids missing chunks of their faces lost at death. There are all sorts of gory goodies in Lot 13, like a fruit bowl of rotting flesh.

It is quite unfortunate that issue #5 is the finale of Lot 13; I get the feeling there could have been so much more. Perhaps not so much for the Nelsons, as they were quickly wearing out their welcome, but the apartment building was home to crowds of cold bodies and I don’t doubt Steve Niles would provide great stories for them all, given the chance. Glenn Fabry’s art is very nice, too. He’s got a real skill for articulating torn, demolished, rancid flesh and wounds.