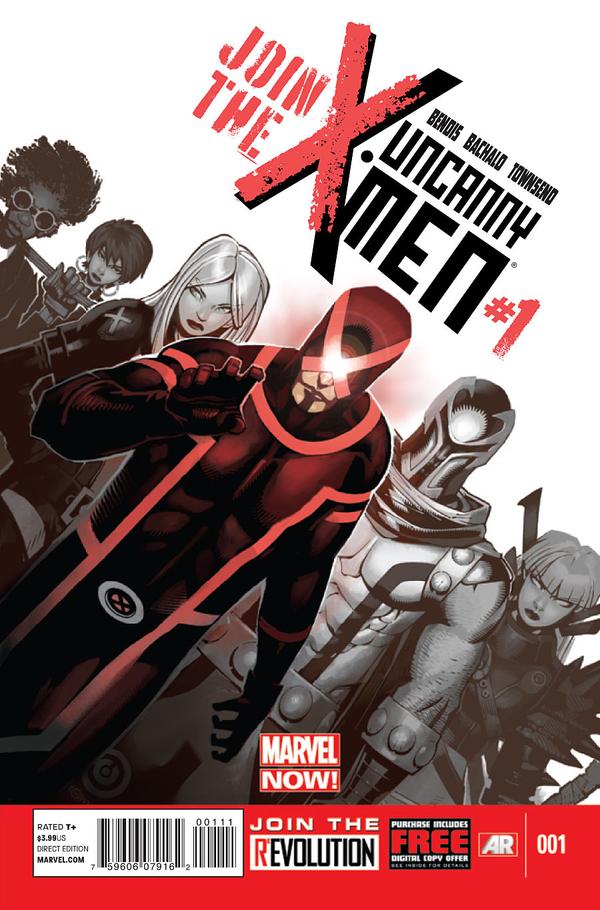 The Dark Phoenix Saga. Days of Future Past. Manifest Destiny. Some of the biggest stories in X-Men history can all be traced back to one book. That book? Uncanny X-Men. The flagship title that spawned numerous spin-offs and has been written by some of the biggest names in comic history over its 40 year run is back with it’s third incarnation. After the events of Schism, which ended the relationship between Cyclops and Wolverine, so too did the original Uncanny X-Men come to an end after an impressive 544 issue run. When Kieron Gillen took over and relaunched the book focusing on Cyclops and his Extinction Team,  that too ended when another break in the mutant world caused Cyclops to become a wanted man and take up the mantle as the new leader of the Mutant Revolution. That’s where we find ourselves now. But is this new volume of Uncanny X-Men worthy of the legacy that the title brings? If this first issue is any indication of things to come, I have no doubt that this title is completely and totally worthy of its name.

Taking place after the events of All New X-Men #5, Cyclops finds himself on a crusade to locate and save all of the new mutants that have popped up since the Phoenix Force was destroyed in Avengers vs X-Men. One of the ways he’s done that is by recruiting members of his old Extinction Team (Magneto, Emma Frost, Magik) and creating the New Charles Xavier School for the Gifted. But the challenges the team face are many. Sentinels, S.H.I.E.L.D, and every form of government are looking for them and some will take more extreme measures to make sure the mutant uprising is stopped before it can begin. On top of that, Cyclops, Emma and Magneto have lost control over a majority of their powers and are doing everything in they can to try and hide that from the public.

Thanks to his recent work with All New X-Men, Brian Michael Bendis seems to have a really great grasp on how to write these characters in a compelling and interesting story. Throughout the first issue, time is split between a mission in San Diego and a conversation between Mariah Hill and a mutual friend who wants Cyclops’s inner demons to be brought to light. The way the story bounces back and forth creates a really intriguing rhythm for the issue that really showcases Bendis’s control of pacing. He also handles recapping previous events well, as they never feel like recaps, rather a natural conversation that also advances the current story. Balancing that with humor, a twist that (while predictable) adds weight to future issues and a heart that feels like classic X-Men, Bendis has done a fantastic job of setting up things to come. My only gripe is that while a lot of things are explained and retold to those who haven’t been reading All New X-Men or haven’t read AvX, some things in the book might still confuse completely fresh readers who haven’t had any history with the X-Men in the past. That’s not to say the book is unapproachable, but there is a degree of prior knowledge needed to fully enjoy the book.

Chris Bachalo (Wolverine and the X-Men), is on art duties for this first arc and I absolutely loved it. While his overly-stylistic, almost cartoony characters and backgrounds may not please everybody, the way he handles action is second to none. Part of that is attributed to the fact that Bachalo has a great control over panel structure that is both pleasing to the eye and easy to follow. Whether it’s four or fourteen panels, he knows how to keep action in a controlled chaos that rarely ever loses the reader. Being the colorist for the book also helps when it comes to the action scenes. Each character has a specific color or color pallet that is easily distinguishable from the other characters and stands out from all that’s going on in the background. Even in the quiet moments, Bachalo knows how to structure things to make them interesting, which is a lot harder than people give it credit for.

Buy it. Uncanny X-Men #1 is a great new beginning for the flagship title that shouldn’t be missed by anybody. Brian Michael Bendis has crafted an intriguing and well written story that blends action, humor and drama quite well. Add in Bachalo’s fantastic art, which is second to none when it comes to action, and you have the start of something great. While some things might be lost on those not familiar with the current ongoings of the X-Men universe and Bachalo’s style might be too cartoonish for some, that hopefully shouldn’t detract too much from a book that really should be read by anybody who has an interest in Cyclops and/or the X-Men.