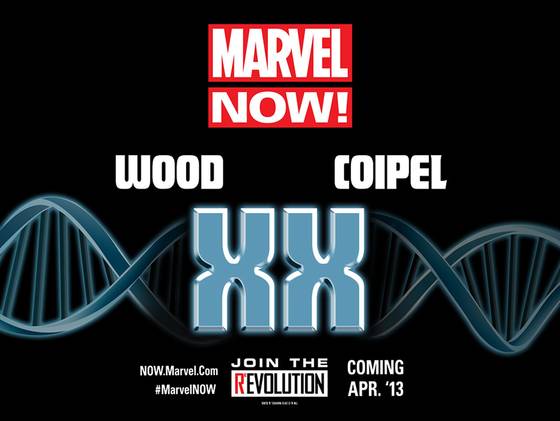 With the new year already in full swing and a ton of new titles set to hit the shelves shortly, Marvel decided to release a teaser for a new title in April. Like their other recent teasers it only contains one word, or in this case two letters. The keyword “XX” is displayed inside a blue DNA strand and already it’s caused a lot of speculation and predictions as to what the book might be. The most popular guess is that it has something to do with mutants, more importantly something to do with a female mutant (since double-x usually means female when discussing genetics). Whether this means X-23 (who’s in Avengers Arena currently), Kitty Pryde, or any of the other popular female mutants remains to be seen, but the creative team certainly has me intrigued.

Brian Wood, no stranger to the mutants with his work on Generation X and Ultimate Comics: X-Men, is set to write this title alongside fellow mutant veteran artist Olivier Coipel (House of M). Both of these men are extremely talented in their own right, but when you put them together (and doing something they know so well) it makes for something truly extraordinary.

What this title is and what the double-x stands for should be revealed within the next week or so, but for right now what are your guesses as to what this title might be? Is it a mutant book or is it something completely different? What do you think about the creative team? Leave a comment below and let us know what you think.