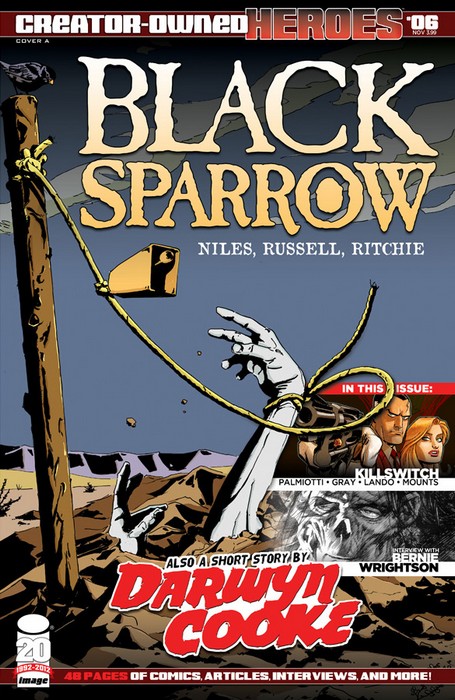 Issue number six introduces creator Darwyn Cooke to the talented lineup already contributing to Creator-Owned Heroes. Cooke tells the story of an ambitious architect in the atomic era struggling to see the project of his dreams brought to life. Steve Niles’ story Black Sparrow closes with a morbid and shocking twist. Jimmy Palmiotti’s assassin story, Killswitch, delivers more bang, blood and deceit than ever before. Although each story in issue six is quality material, my personal favorite is Black Sparrow. The creepy intention of Black Sparrow has been blunt but not too simple as to feel repetitive.

Creator-Owned Heroes number six does not fail to deliver the usual treasure trove of advice and knowledge from comic book industry veterans. You’ll find help writing better stories, tips on connecting with retailers and a  list of staff picks for October. 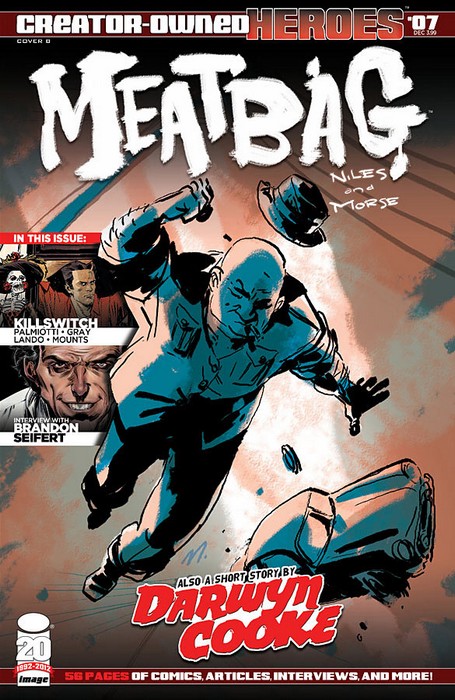 Issue number seven starts with another quirky story by Darwyn Cooke, this time about a mysterious book which brings death to all who read it. The plot thickens in Killswitch as assassin Brandon is hunted. It becomes clear that not even the one friend Brandon thought he had is a friend any longer. Steve Niles and Scott Morse begin a noir detective story that’s heavy on text and simple in art style. Issue seven also includes a few strange short stories that work well enough as filler between the interviews, advice columns and staff picks list. Among the extra material in this issue is a fun question and answer session between Steve Niles and his Twitter followers.

I usually find the stories of Creator-Owned Heroes to be the real pulp of the book. Interestingly, issue seven struck me as quite the opposite. Although the stories are always well done in this series, the extras in this particular issue, I felt, were the more fun reading.

Verdict: I will continue to suggest that you buy  Creator-Owned Heroes. This series is doing something that no other comic book out there is doing, which is giving you a package stuffed with great storytelling and helpful information for creators hoping to make their place in the comic book industry.