I love comics. I love their stories and the way that they beg for your imagination to explode with wonder. Comics are one of the most creative and adventurous forms of self expression that we have as writers and artists, and we would be nowhere in that beauty without the wonderful characters that inhabit them. I invite you to take a good hard look at the Top 10 Character in Comics in the Year 2012. Each character featured here begged for my imagination to be set to overdrive, and contributed to my happiness in comics throughout the year. Some made me laugh, some took my to the far reaches of the cosmos, and a few of them even almost got me to cry. So without further or due, I present to you my Top 10 Favorite Characters in Comics for the year 2012. 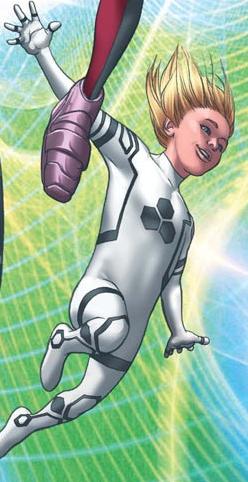 She’s got genius-level intelligence, is an inter-dimensional diplomat, and is damn hard to find while playing hide-and-seek. Valeria Richards, daughter of Reed Richards (Mr. Fantastic) and Susan Storm Richards (Invisible Woman), is a calculating beacon of hope for the universe, and is my favorite character of 2012. All throughout this year, Valeria’s given me some of the most genuine moments in my comic book reading career. Through Valeria , I laughed, I learned, and I even came close to shedding a tear or two when it was time to say goodbye.

She’s the kind of hero that I would want standing by my side when the world begins to fall. She’s also one of the toughest kids I know. Jonathan Hickman‘s FF (Future Foundation) has been my absolute favorite Marvel comic book that I’ve ever had the pleasure of reading. So much of that enjoyment was because of this razor-sharp, blonde spitfire. I can’t wait to see what else she brings to the table as we get farther into Matt Fraction‘s run of FF. I’m ready. Let’s venture toward the stars, Valeria.

Boy, when Damian first came onto the scene in the DC New 52’s Batman and Robin, a lot of people outright hated him. It wasn’t until about the third or forth issue where Damian’s attitude toward his father, Bruce Wayne, began to become a little more complex. As we watched Peter J. Tomasi’s “Born to Kill” story arc  take shape, readers suddenly began to see the makings of  a  truly moving father and son dynamic. Damian might be born of bad blood, and he might even be a killer; but there’s no denying that this ninja-like bat family member can’t hold his own.

Having lost a father myself,  I’ve found a particular connection and kinship with Damian. That’s really why he’s here. I find him to be the Robin with the most depth and sense for what it takes to get the job done. Yes, often times he has an attitude problem and can be a bit of a pain in the ass, but I like that about him, too. 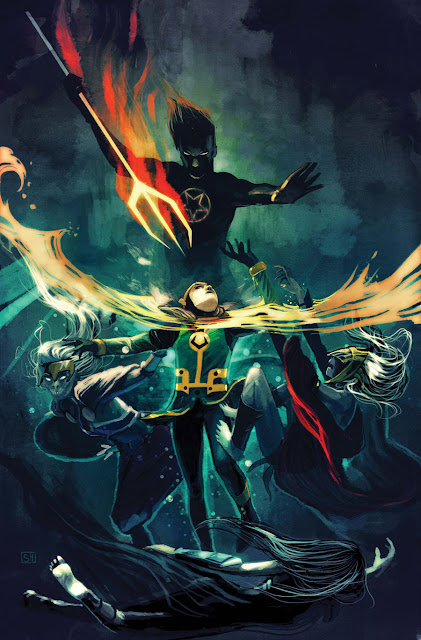 Loki, The Trickster God of The Nine Realms, even in the body of a young man, is not one to be trifled with. Loki, and his Double-Triple-Quadrupedal-Infinite Agent-like ways made him out to be the James Bond of the Marvel Universe in the pages of Kieron Gillen‘s Journey Into Mystery series. Forever making mischief and baiting the very lords of Hell, Loki, lied his way into my heart and broke it wide open. He is not to be trusted, but Odin help you if he’s working against you in any way. With a tongue for lies and a knowing of how to manipulate even the most cunning of souls, Loki is one of my favorite comic book characters of the year. I’m just going to say it. Out of all of the members of the Bat family, I find that Kate Kane, as Batwoman,  is the only member who truly stands alongside Batman as an equal. Not that Dick, Jason, Damian, Stephanie or Babs don’t all have their strengths (I love them too), but Batwoman has the word “legend” written all over her. What I’ve truly loved about W. Haden Blackman and J.H. Willam’s Batwoman is that it feels like a supernatural horror comic inside the Batverse, more than anything else.  That aspect of her character, that air that hangs about her story, really speaks to me. She’s a strong and positive role model for young women, and looks damn good in her sleek costume design and scarlet red hair. Kate Kane is a wonderful character, and more than likely the best woman that’s emerged from the DC New 52. That’s why she’s on my list.

Carol Danvers is fierce. Embraced by male and female readers alike, Kelly Sue Deconnick’s Captain Marvel has soared into the hearts of many since breaking out onto the comic scene earlier this past year. Whether she’s delivering a plucky joke, careening through the stratosphere, or breaking the sound barrier, Captain Marvel strikes me as a leader, and a prime example of what it takes to be an important woman in comics. Often over-sexualized (and depicted in gratuitous poses inside of their own books), female characters in the comics industry aren’t always portrayed in the best of ways. Kelly Sue has seen fit to make Carol a character that readers can be proud of, as well as care deeply about. She’s heroic, passionate, and will put you through a wall or five if you so much as look at her funny. In fact, I’d be sort of nervous if I didn’t have the sense to include her on this list. I salute you, Captain Marvel.

Where do I even begin? Barbara Gordon has been through a lot in 2012. Gail Simone –  Bab’s heart and soul, was faced with the not so easy task of taking Barbara (as Oracle) out of her wheelchair and back onto the streets. Some readers were overjoyed, while others were skeptical as to how regaining her ability to fight crime outside of the chair would effect Barbara. Relief flooded the senses as Barbara’s powerful narration of her journey filled readers with a unrelenting thirst to see her succeed. It wasn’t about vengeance, it was about a phoenix rising from the ashes. Because not only did Babs rise from her chair, but she’s proven that she’s still got what it takes to keep Gotham safe from harm. Forever a hero that’s  been kicked around, Batgirl lays her life on the line every night to uphold her promise to a city that’s trying so very hard to kill her. I love Batgirl and she deserves a spot on this list.

The inclusion of Doctor Octopus on this surprises even me. However, I’ve got to give it up to the man who finally got one over on Peter Parker and enraged millions of Amazing Spider-Man fans everywhere.  Say what you want about Dan Slott‘s finale to one of the longest running series in comic book history, but I personally thought that it was brilliant. Slott’s carefully laid plans, in my humble opinion, were a stroke of genius and I am more than willing to follow Spidey into his now more Superior sense of purpose. Bold moves like this are what shakes up the industry and keeps things interesting. Peter Parker, I’m sure will be back further along the line. But for now I think that he’s earned himself a break from all the fighting, thwiping, and death surrounding him each and every day of his life. Doc Ock was already one of Spidey’s most formidable foes, but after Amazing Spider-Man #700, he very well may have taken the crown. That’s why Doc Ock deserves a spot on this list.

Child characters, if written correctly, are some of my favorite characters in comics. Maxine might look like just an innocent looking cutie pie who can summon and animate the corpses of dead pets, but she’s actually the Avatar of the Red. Oh yeah, did I mention that she’s only 4-years-old? Not only does Maxine hold the salvation of mankind (as well as nature inside of her tiny little hands), but she’s quite often very hilarious. Fearless and unwavering, Maxine is always ready to dive headlong into battles unknown even if she hasn’t taken her nap. I love that upon picking up Jeff Lemire’s Animal Man you’d assume that the book is all about Buddy Baker. Though, I see Animal Man as being  more so about this little girl and all of the love she has to give to the world. She’s a character that, if they ever advanced her age inside of the story, could be capable of so many more amazing things. For these reasons and many more she deserves a spot on my list. 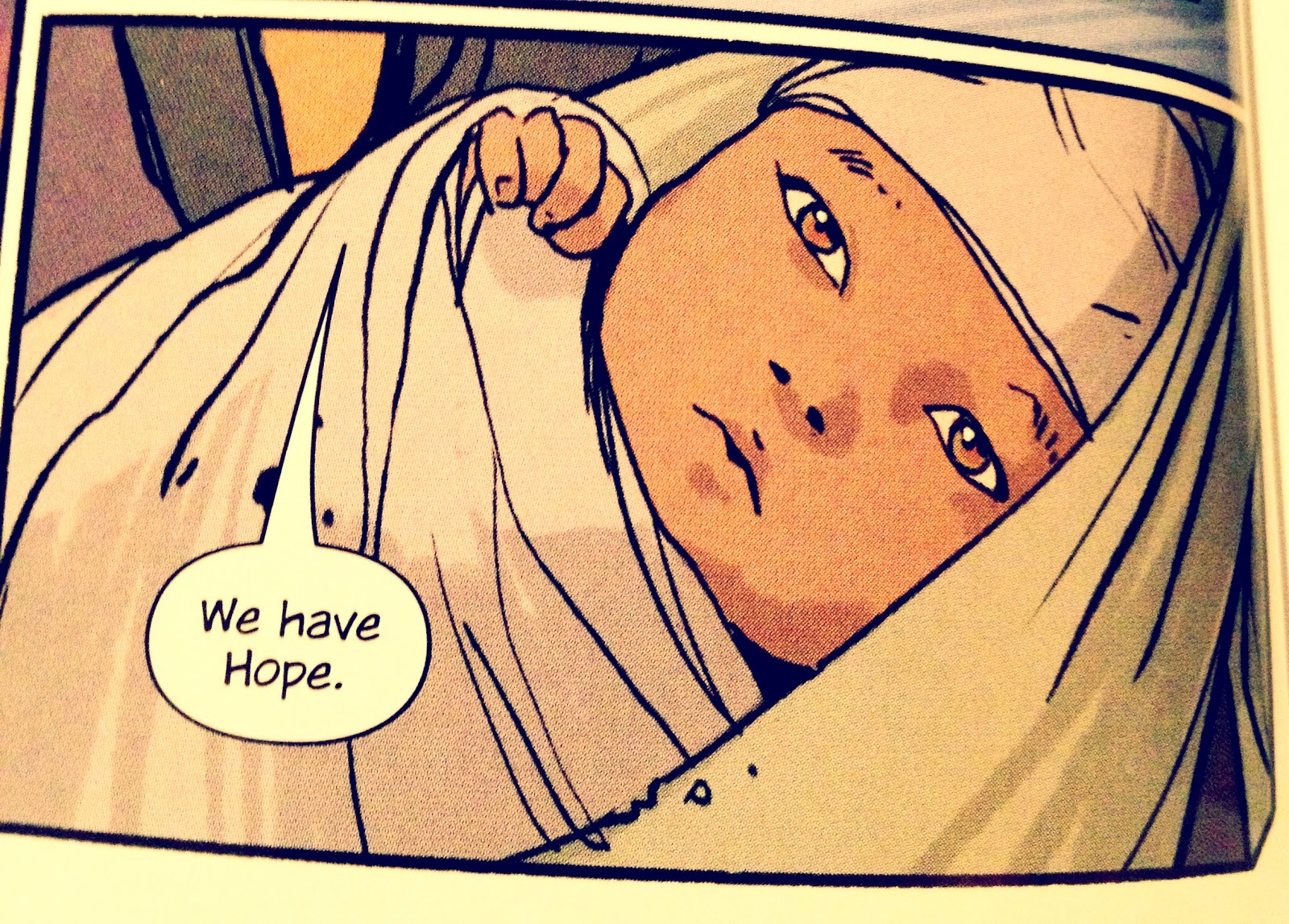 Brian K. Vaughan and Fiona Staple’s Saga is almost about as perfect as a comic can get in today’s day and age. For as much as I love Alanna and Marko, it’s Hazel’s narration that made me fall head over heels for Saga.  Despite the danger that surrounds her star crossed parents, Hazel’s beautiful perspective on the events of her life fill the pages of Saga with hope, and above all else, love. It’s rare that a character so young would be the voice of an epic science fiction adventure, but it’s all right in front of you as you follow this little girl from planet to planet in the name of hope and escape. Much like Valeria Richards, Hazel represents a young female character with unlimited potential in a universe of comics. I would love to perhaps watch her grow up as Saga continues on its way to being one of the greatest comic book stories every told. We’ll just have to wait and see.

Ha ha ha! Yeah, have you read Jason Aaron‘s Wolverine and the X-Men #17? No? Well, you should go and do that, because after you laugh your freaking ass off reading that book this is going to make a whole hell of a lot more sense. Doop is the one you call when you need the dirtiest of jobs to be done. He’s a problem solver. Forever the unsung hero of the day, Doop is your man, or alien, or whatever. I’ve also got it on good authority from Warbird that  he’s pretty good in the sack. He’s lazy, he’s often drunk, and he even smells a little funny; but damn if Doop did not give me some of the greatest belly laughs this year in comics. My hat is off to you, Doop. In a single issue you managed to claim a spot on my Top Ten. Good job, buddy. Now go have a beer, take a nap, and wait until I have something unseemly for you to do.

And there you have it. See you at the end of next year!

* This list was compiled and the words were written by listening to the following bands and albums: Tool’s 10,000 Days, Godspeed You! Black Emperor‘s Hallelujah! Don’t Bend! Ascend!, and Thee Oh Sees‘ Putrifiers IIep.