<CHANGE IS AN ILLUSION. PLAY NICE.> 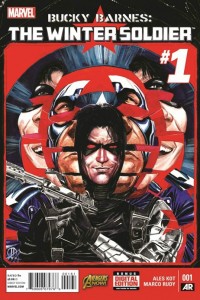 And with that ominous declaration, Bucky Barnes finishes another mission as “the man on the wall,” the job he inherited from super spy Nick Fury in the recent epic crossover, Original Sin. That simple statement also captures the core conflict and spirit of Ales Kot and Marco Rudy’s brand-new series, Bucky Barnes: The Winter Soldier. The statement—and the cold open it caps—reflects the nature of the Bucky Barnes character: Golden Age sidekick turned retconned super Soviet assassin turned Captain America turned Black Ops superhero turned intergalactic assassin. And yet, as Barnes states, “change is an illusion”; he is and always will be the “one agent, in the right place, at the right time with the right skills [who can] be more effective than an army.”

Since Ed Brubaker brought Barnes back in his epic run on Captain America nearly a decade ago, Bucky has quickly ascended the ranks of Marvel fandom to become one of the most prominent and complex characters of the entire canon. Perhaps due to his elevated status as the result of the recent Captain America: The Winter Soldier film, or perhaps because the character is just so damn cool, Marvel has launched a brand new Winter Soldier comic book in the aftermath of Jason Aaron’s acclaimed Original Sin crossover. The premise is simple: Nick Fury used to be “the man on the wall” who would protect the Earth from intergalactic and celestial threats by killing them before they came to kill us, but now it’s Barnes’ job, and he’s coping.

Said “coping” includes recruiting a partner—cult favorite Daisy Johnson, aka Quake—and breaking up an undersea drug ring with an old Invader’s buddy. And writer Ales Kot and artist Marco Rudy relish turning what would otherwise be a space-hopping noir into an absolute acid trip of intergalactic hallucinatory escapades.

For real. Bucky Barnes: The Winter Soldier is an absolute trip from start to finish, both in terms of the script and the artwork.

I’ve been a big fan of Ales Kot’s work on Zero over at Image, what with its spectacular blend of military grit and pulpy fantasy, but thus far his work at Marvel has paled in comparison. Here, however, Kot’s idiosyncratic voice can really shine, as he perfectly captures both Barnes’ moody, brooding personality as well as the bizarre extraterrestrial interactions that the job entails. That operant theme—that nothing truly changes—is absolutely fascinating given both Barnes’ own canonical history and the end result of each mission, and it really demonstrates just how deep and insightful a comic can get. Barnes’ meditation on the Daoist philosophy and his own interactions with the universe are profound and provoking, and never do you question why the heck he’s a grown man still going by the name “Bucky.” 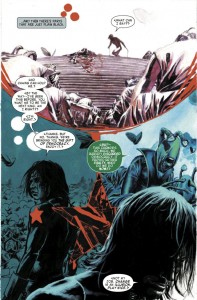 Marco Rudy’s innovative, surrealist aesthetic is absolutely stunning, though there are times when I literally could not comprehend what the f**k was happening. Rudy has absolutely no concern for paneling or logic in his visual storytelling, instead focusing on ambiance and abstraction as he captures the operatic scope of the universe in this book. For the most part, it works, making for a trippy, spacey visual experience from start to finish. There are, however, some serious narrative consequences to the abstractions in the art, particularly the final cliffhanger page. I think I know who we’re looking at, but I can’t be sure, making for what could be a powerful moment a bit indecipherable.

Buy. Bucky Barnes: The Winter Soldier #1 is an absolute trip from cover-to-cover. I mean, it’s a former sidekick from WWII dressed in Soviet assassin garb floating around in space executing gods and alien terrorists: what’s not to love? Or at least completely lose your mind over? Ales Kot and Marco Rudy have captured a new energy for one of the most complex and important characters of the last decade, and I’m excited to see where it goes over the next few months!

PS – I freaking love Bucky Barnes. Did I mention that? But this is definitely not Brubaker’s noirish Winter Soldier; this is something completely different… and very very engaging. Check it!