Resident Alien: The Man with No Name #1

Before I decided to read Resident Alien the only thing that I knew about it was what the solicit said about it:

A stranded alien hides in plain sight, posing as a doctor in Patience, Washington. After he accidently shows himself to the federal investigators who 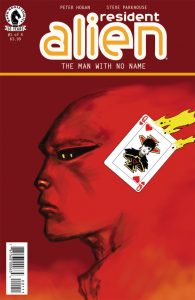 are on his trail, a mysterious arsonist and a stubborn agent arrive in town to heat things up!

The idea sounded very intriguing to me and the solicit even labeled it as a stand-alone murder mystery. I thought, Great! I’m in! Lets see what it’s all about! What I found out on the front title page is that this series is the start of a fourth volume with the same characters, but again, it is a Stand Alone Mystery so I should easily be able to jump right in and enjoy right?

That is where things get a little tricky. Before going into the full review, for full disclosure, I must say the first time I read Resident Alien I hated it. I felt as if I was dropped in the middle of a series without knowing what happened before. It left big gaps with some of the basic setup of the story missing. I did not think basing a review on Resident Alien would be fair without doing a little research on the series and found out quickly two things that made the read quite a bit more enjoyable. First is that Harry has the ability to project a disguise so that, to the people around him, he looks like a human. Also, he has the ability to perfectly read people’s feelings and thoughts based on the smallest change in body language.

As far as the actual comic I love the concept overall–the idea that a alien crashes on earth and is stuck here hoping that he might be rescued but instead of causing problems or go into hiding, he decides to hide in plain sight and take on the identity of a retired doctor living in small town U.S.A. Since of course he comes from a much more advanced society, being a retired doctor is boring to him he decides to become an amateur detective on the side.

Resident Alien: The Man with No Name starts as any good serial mystery would. People going on with their everyday lives doing what they would be doing, including our resident alien Harry who is meeting his friend the mayor for lunch. Of course, being the Mayor of a small town means that the town residents with their trivial problems are constantly greeting him. These interactions combined with the town sheriff making a visit to a local resident about a picture gives the reader a list of possible suspects as the mystery unfolds on the last page. The beauty of the way that these characters are portrayed is that any of them could be the suspect while at the same time it could have been none of them. It is a line that is hard to walk sometimes and Hogan does it brilliantly and without tipping his hand as to who the perpetrator is.

Throughout Resident Alien, Harry is drawn in his alien form, which really threw me off in the first read. After finding out that those around him saw him as human and only the reader sees him as an alien many of Harry’s comments and actions make more sense. While the 4th wall is never broken, the reader gets a sense that they are part of a secret that even those closest to Harry do not know. It also leads to several panels where I got a bit of a chuckle as Harry makes comments that go over the other characters heads while but are a wink and a nod to the reader. Parkhouse’s art has just enough grit to remind you that this is a murder mystery book, but its not so much as to give the book a dark tone. The details on the faces adds to the nuisances of each of the towns residents as they talk with the town Mayor, giving a better feeling as to their goals and hidden agendas.

Verdict: Wait and See. If the concept of the book is something that sounds interesting then my suggestion would be to first go and read the other three collected editions of the series and then come back and visit this volume. Resident Alien hits on many of the points that you want to see in a first issue of a murder mystery book and the art does nothing but enhance and build on the writing. That being said without having read any of the previous volumes there are chunks of backstory and setup that are missing and really take away from the enjoyment of the book as a stand alone issue.