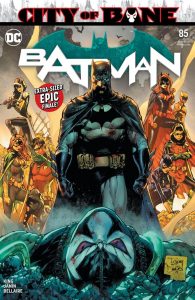 To all good things there must come an end. Since the dawn of the DC Rebirth Tom King has been orchestrating the adventures of DC’s Dark Knight in the bi-weekly Batman. Over the course of the last few years King has been telling multi issue arcs that comprise a much wider story that culminates in this weeks Batman #85. For the better part of the series King has been putting Batman through an array of challenges and obstacles that have slowly lined up to be the master plan of an alternate Earth’s Thomas Wayne to get Bruce to give up being Batman and simply be Bruce Wayne. With each challenge placed in front of him Batman has risen to the occasion and with this final issue of the run he finally decides his own fate.

Batman #85 sees that final showdown between Batman and his alternate reality father Thomas Wayne. With the rest of the Bat Family seemingly under the control of the Psycho Pirate it falls on Batman and Catwoman to deal with this final threat. King’s narrative is an interesting choice for the issue as it is told out of chronological order with much of the book set after the confrontations between the two Wayne’s. Not that I was expecting a status quo change due to this climactic battle but sadly it did diffuse some of the tension that had been building over the last few issues. Much of the issue is King putting all of the toys back in the box. He offers a fitting conclusion to Gotham Girl, a hero introduced back in King’s very first arc and has had an emotional rollercoaster ever sense. Thomas Wayne and Bane, the two main antagonists for much of King’s run, come to a believable meeting of the minds that allows for this to be a finite conclusion for one of them or just opens up a new story for another writer if they choose. The fight is of course intriguing and the outcome does use some very logical and smart setups to get to the end, which is never in doubt in the way the story is structured. My favorite part of the issue was really Bruce Wayne having a beer in a bar while he watches a football game with some Gotham locals. The dialogue in the scene really summarizes King’s take on Batman and what that moniker truly means to Bruce. The final few pages are an epilogue/prologue of what comes next as King exits and James Tynion IV takes over the title. I’m looking forward to this run as well as I loved what Tynion IV did on Detective Comics at the beginning of Rebirth and I think he writes one hell of a Batman comic. There’s not much to this but it does return a villain who is very prevalent in the DC Universe and their cinematic universe but has been noticeably absent or in the background of King’s Batman run. It will be interesting to see where this goes.

Batman #85 is both a satisfying and frustrating conclusion to a story that I have been enjoying over the years. While many readers and even some in DC editorial have bailed of King’s master plan, I have been enjoying this story, both the small arcs and larger storyline, but was a bit put off by this final issue. I understand that many comic writers want to put everything back to the way they found it but with such an ambitious tale it feels like a bit of a let down here. I know that there is more to come in King’s Batman & Catwoman but I felt like there should be more of an impact here other than the loss of Batman’s intrepid cohort Alfred. Too much of this issue was righting the ship and making sure everything was status quo for what comes next. As an old school Earth 2 fan I’m interested in where the Bat and Cat relationship goes from here and maybe there is a baby Huntress in the future yet even that is left in a way that it’s easily washed away. In the end I was hoping for more in this conclusion but with the way DC editorial stepped all over King’s run in its last act I’m not surprised. It was nice that Mikal Janin’s artwork graced this issue as he was there all the way back in DC Rebirth Batman #1 (and before that on Tom King’s underappreciated Grayson) and his beautiful art has only improved over the years. He has grown into a superstar artist.

Verdict: If you have been with King’s run on Batman from the beginning then it’s a Buy. Batman #85 is a solid conclusion to King’s overall run the structure and consequences leave the reader wanting a little more from what has been an epic run. Yet if you’ve been with King since the beginning it’s nice to see this story concluded.