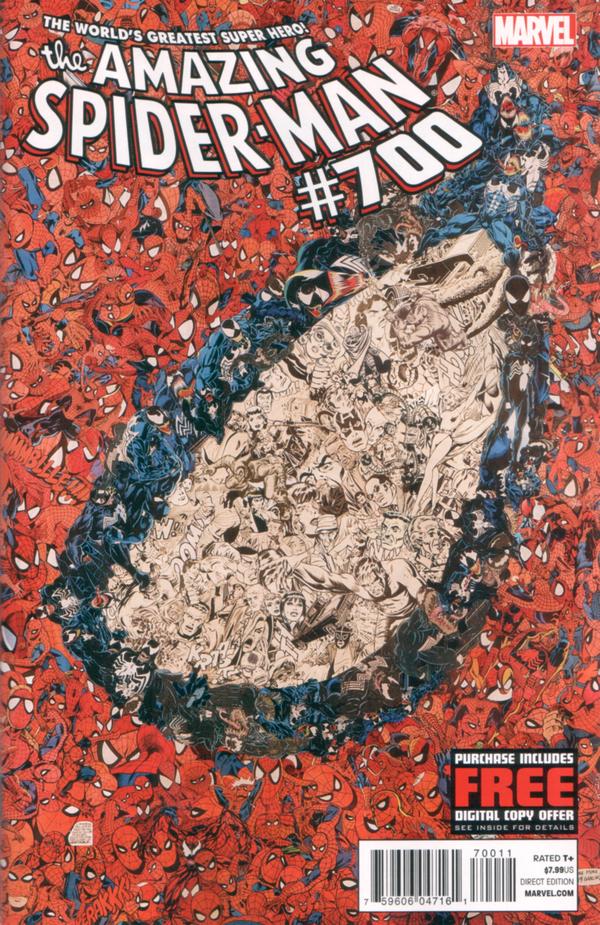 After 50 years and 699 issues, it all comes to an end with issue #700. The eight dollar behemoth is finally here but does it live up to the hype? Is this the proper end for such a great series? While the answer may be different for some, I believe that this issue is worth every single penny and is definitely worth checking out if you’re a Spider-fan.

“Doc Ock” (Peter) only has a few hours left to live. In his last big act he decided to execute one of Ock’s plans and get him sprung out of jail with help from Hydro Man, The Scorpion and Trapster. When “Spider-Man” (Doc Ock) gets wind of this, he gathers all of his friends and family inside a secret facility and goes to thwart Ock at every turn. But Ock is wise to Spider-Man’s tricks and has one of his own up his sleeve. It’s a mental game of one-up between geniuses as the clock runs down on Ock. Will he be able to stop Spider-Man in time or will the villain finally get the better of him?

This super-sized book is packed from start to finish. Slott has written a story that, while not without controversy, is highly entertaining and keeps the reader on the edge of their seat. Watching their battle play out all over New York and seeing them try to outsmart each other is an engaging read and really pulls the reader in. As good as it is though, it’s definitely bittersweet and will leave some readers less than thrilled. The ending sets up a new direction for Spider-Man and I’m still not sure if I’m entirely on board. But as a stand-alone story and as the end of this big arc, it works and I applaud Slott for a job well done.

The back up stories, written by J. M. DeMatteis and Jen Van Meter, are both great reads as well, despite their more light-hearted tone. DeMatteis story “Spider-Dreams” tells the story of an aged grandfather telling his grandson about how he used to be Spider-Man. Some facts are slightly off, either due to his age or because the reader isn’t sure if he’s telling the truth (which makes for some hilarious visuals), but there is a lot of heart in this story. Even if he wasn’t Spider-Man, it shows how hard life can be for a hero and how eventually everyone needs to hang up their masks. Meter’s story on the other hand shows Black Cat trying to distract the police while Spider-Man takes out a giant robot in Central Park. While all this is happening, Black Cat finds herself running into other super-couples, which gives her some great ideas for future date nights. It’s a quick read and it doesn’t carry the emotional punch of the other two stories, but it’s sweet and it’s funny and it works great as an end to the book.

Longtime Spider-Man artist Humberto Ramos handles the art duties for the main story and it’s obvious he brought his A-game. Every character is highly detailed, expressive and colorful. Action scenes are a brilliant flurry of color and have a magnificent panel-to-panel flow that makes even the quickest scene intense. More importantly though, he knows how to frame the quiet moments to give the biggest impact, something that is very important in a highly emotional issue like this. Honestly, besides a few faces or mouths that look slightly off, this is some of Ramos’s best work in a long time.

Giuseppe Camuncoli and Stephanie Buscema handle the back-up stories and both of them bring something unique to the table. Camuncoli leans toward the realistic like Ramos, but it only seems to apply in the present part of the story. Even there, inks and blacks are more prevalent and everything has a nice outline to it, which works well with the use of shadows. The flashback scenes are really the star though. Taking hints from classic Spider-Man artists, mixing that with an old school coloring scheme (that is purposefully a little off on some characters) that changes the closer the story gets to the present day and you have a truly unique looking story. Buscema on the other hand has a more stylistic feel that is very reminiscent of classic 60s-70s cartoons. The coloring is magnificent, characters are expressive and jumping back and forth between Spider-Man and Black Cat is used incredibly well. I’d love to see her work with Spider-Man (or at least Black Cat) again sometime, she’s certainly got a knack for it.

Though bittersweet, Amazing Spider-Man #700 is a fitting tribute to the fans that resets the status quo in a way most people probably weren’t expecting. Dan Slott, as well as the other authors, obviously have a lot of respect for Spider-Man and what he’s done for Marvel Comics and all the stories do a great job of showcasing just that. While the ending may not satisfy a lot of people, it’s still a story worth reading and I can’t wait to see what the future holds for Spider-Man, even if I may not completely be on board.