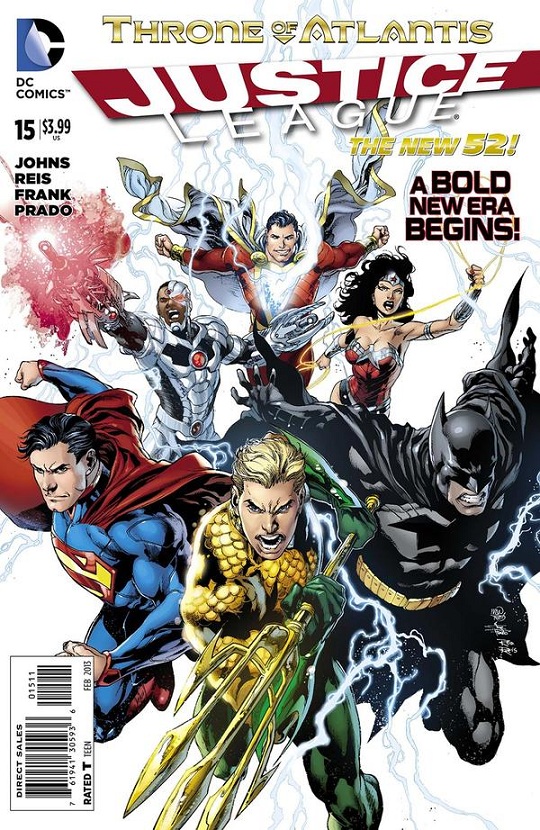 It’s the end of the year.  A time to reflect back on the past 365 and prepare ourselves for the next era in our lives.  So, as we set the resolutions to better our lives for the coming year, it seems that the cover for Justice League #15 is also proclaiming a bold new era for the team.  And from the looks of this issue, it would appear that Johns has decided the next phase in this continuing drama is all about bigger.  But is bigger always better?  Perhaps not always, but it certainly is in this situation.

War is declared!  Dates are engaged upon!  Teammates actually call on each other!  And…Cyborg still sits up in the Watchtower alone (who should really resolve to get to a movie or something once in awhile).  This issue actually has quite a lot going on in it.  As Cyborg monitors and investigates a naval mishap at the behest of his father, Clark teaches Diana his guarded secrets of disguise so they can go on a dinner-date in peace.  Meanwhile, Batman gets an assist from Aquaman, only for the overly proud quasi-co-leader-elect to ask for Bruce’s help in a problem of his own as well.  Oh, and the entire eastern seaboard is attacked by the forces of Atlantis, so that’s pretty big too.

The overview sells the entire thing short, as this chapter goes above and beyond to deliver in its efforts both on the character interaction level as well as the grand scale action.  The League continues its steady march towards a team of people that trust and rely on each other, making large steps in this issue alone that feel natural as friendships blossom, romance tries to survive outside costumed personas, and alpha male posturing gives way to respected rivalry.  Split evenly with these character moments are action scenes that give any Hollywood summer blockbuster a run for its money.  Overall, a bold new era is all evident here, delivering on its promise of bigger action, intriguing character development, and epic scale plots that will affect the DC Universe at large; providing the title with the criteria needed to rightfully claim its throne as the tentpole of the DCU.

Bringing these larger-than-aquatic-life scenes to the page, Ivan Ries is stunning as always.  Coming off of the Aquaman title he was working alongside Johns with since the launch, he is a natural fit to the demands of the current plotline.  Less surprising and more pleasing though, Ries has also managed to capture the regality and mystery of the rest of the JL members as well, bringing each to life with expressive demeanors, even when placed against the bombastic backgrounds that grace his pages.  While he gave me no reason to doubt his capabilities when announced to take over the JL title, it’s always nice to be proven right that my lack of concern was well placed.

What’s that you say?  Not good enough for you?  Well act now and DC will throw in an absolutely awesome chapter of the continuing adventures of the new Shazam…just for you!  Penned by Johns again with art by the equally impressive Gary Frank, Freddie and the now adult-sized Shazam continue their quest to try to score some beer, but are continuously stymied by the crimes they run across due to so-called happenstance all day.  It is a fun read that moves the plot forward, and ends with the ultimate showdown that has been building for months.

Buy!  It looks as though Johns has hit the tipping point in his Justice League building set.  With characters established, interactions in continuity, and clear roadblocks set before the team both internally and externally; Johns has taken the next step in bringing the scale to match the setting now that he can have fun with the stories he wants to tell.  And while most resolutions do not make it past the month they are made, I am hopeful that the direction and promise evident in this issue, continues for some time to come.

Jump-On Point:  Justice League #15 acts as a great starting to point to follow the new status quo of the League to date.