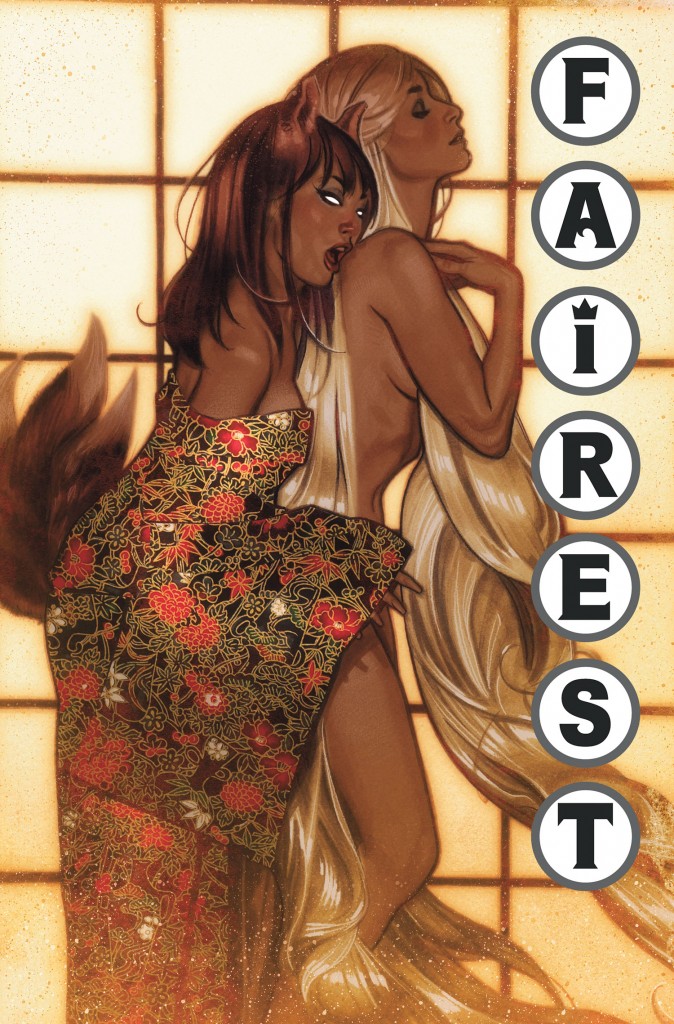 Lauren Beukes is now on my radar. After reading two issues she wrote of Fairest, purchasing a book of hers through the Humble eBook Bundle, and knowing her dedication to her work, I’m excited to continue reading her work as part of the Fables line and her novels outside of comic books.

The ninth issue of Fairest picks up right after Rapunzel, Joel, and Jack were met by an old friend of Rapunzel’s, a woman named Tomoko. Tomoko is not a Mundy; she has the ears of a fox and multiple tails, which are hidden by some sort of magic. She keeps her soul in a foxfire, a bright ball she needs to survive. Tomoko takes us to an Eastern version of Fabletown, filled with a variety of Japanese Fables who hide in plain sight in Tokyo.

Not only does this issue give us more information about Japanese Fables, it takes us to a part of Rapunzel’s past where things began to unravel. Right after she loses her children, Rapunzel finds herself in a new land. Her suicide attempt at the end of the world brought her to the Celestial Kingdom, where she was considered no more than just an ornate addition to the court. Rapunzel meets Tomoko, and their relationship takes off. When the court turns on the Japanese Fables, Tomoko and her people are banished. Rapunzel, on the other hand, passes as a Mundy and is separated from her love Tomoko.

In modern day, Tomoko reveals to Rapunzel that she walked right into a war. The details of the war are yet to be explained, but it seems to have deep roots. There is no doubt that Rapunzel plays a part in this war. Tomoko has plans for Rapunzel and her group, but meddling on Jack’s part is likely to derail everything.

Fairest is a great series, especially for readers who are looking for something outside of superhero comics. Adam Hughes’s cover art is remarkable, and the interior artwork is very detailed. The story is this issue is told in a way that anyone can pick it up and understand what is going on while also continuing a larger story.