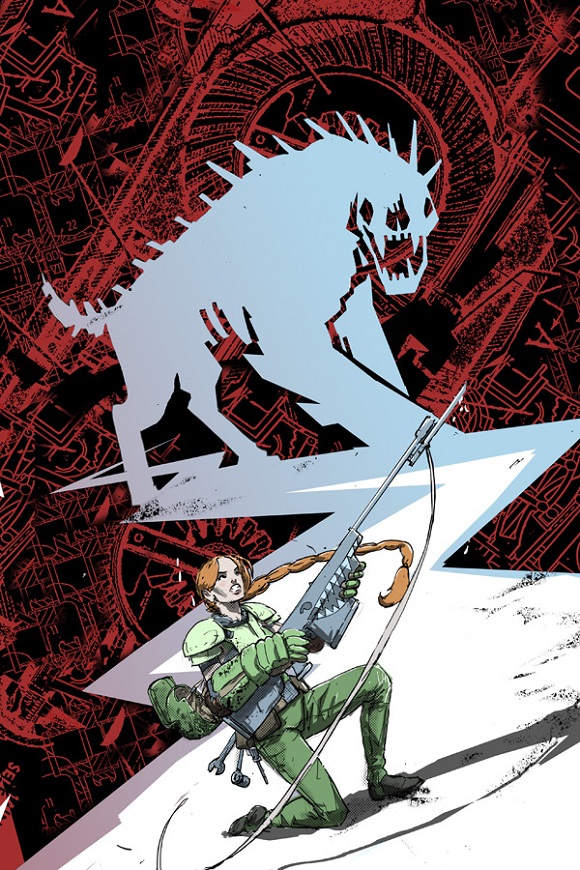 Debris is a book that grabbed my attention, initially, because of the giant, robot, trash monsters. I’m sure that and Kurtis Wiebe brought most people on board—as well it should. Talking Comics own Melissa Megan and I spoke briefly about this series earlier today, and we can agree on one thing: it’s a fun story. Though I wasn’t completely smitten after reading the first few issues, it was definitely growing on me. Debris #3 does more than anything in the first two issues to cement my love of the book.

While there is more Colossal action, what made this issue stand out were the character moments. Kessel’s likability continues to grow, as more light is shed one just why it is he was banished. It’s actually really heartbreaking. You can’t help but feel for the poor guy. The opening of the book shows a flashback of Maya being trained. It shows more of the relationship of her and her mentor. It shows she is a smart and strong character. More importantly it shows her determination. From this you can see that she will do whatever it takes to make sure she accomplishes her mission.

I chuckle at comics often, but rarely do they get anything more than that. There is a scene in this book in which Maya sees grass for the first time, and it had me genuinely laughing out loud. It’s something that was so innocent and adorable, that I couldn’t help but be taken back to times as a kid. Maybe I didn’t take things quite as far as she does, but I was a curious little guy too. Whereas my curiosity was satisfied with answers to an endless stream of questions…Maya seems to be more of the “learn by doing” kind of person. To be honest, that scene is why I will follow this series as far as it will go.

Riley Rossmo’s art hadn’t blown me away in past issues. At the same time, it certainly isn’t bad. Issue 3 is one of the better looking books of the run. While Rossmo has never struggled bringing the action to life, I was never really convinced with his faces, and ability to show emotion. There were times in the first two books that did so well, and others that were subpar. That is a non-issue here. Everything looks and comes off as natural, like faces I see my wife make all the time. And, of course, the action is spot on.

Another Kurtis Wiebe you should all be buying. This is the best issue of the run to this point, and I really want more. Come for the enormous trash-beings, stay for the story and characters that you can’t help but love.