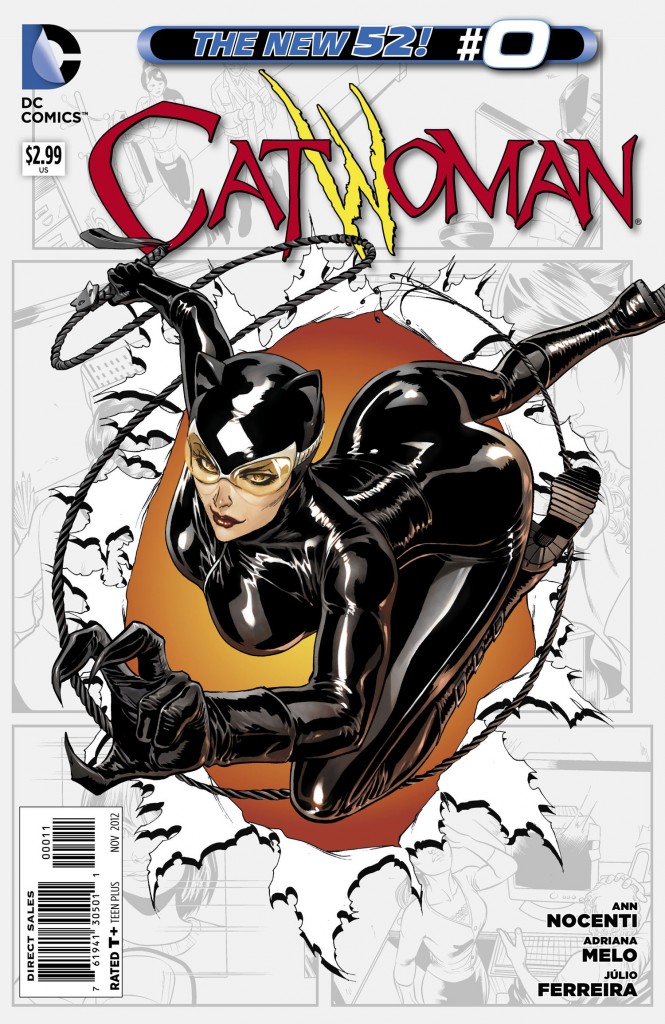 Things have not been easy for Selina Kyle during her run inside of the DC New 52. Plagued with an overly sexualized storyline, characters that lack staying power, and less clothes than a nudist colony, Catwoman is no longer The Cat’s Meow in the eyes of her fans. Though when word came down the pipeline that a new writer would be taking over the responsibility of Catwoman, it was enough to get some of the more desperate fans, (and this reviewer), excited that there might still be hope for Selena and her cat-like capering antics. Alas, after reading Catwoman #0 three times before writing this review I am left feeling ever more depressed about the state of Catwoman  than ever before.

I have yet to read a #0 issue that was plagued with more problems than Catwoman #0. Despite the efforts of the books new writer Ann Nocenti, Catwoman is still not a book worth adding to your collection just yet. For starters, the presentation of the story is all over the place. Jumping in and out of events set in the past, present, and future, Catwoman #0 was increasingly hard to follow and as a result made the events unfolding on the page very difficult to even care about. With the exception of Selena, every character in this issue amounted to being a faceless and unimportant nobody in regard to all of the events that have taken place in the DC New 52 continuity thus far. Corporate fashionistas? Creeptastic office co-workers? Wealthy meatheads with piles of glittering jewels tucked away in perfectly visible and open boxes inside of their posh Gotham apartments? Good Samaritan mentors who are in actuality up to no good? What the hell is going on in this book?

My chief complaint with the book is that I feel nothing for Selena’s new origin story whatsoever. I think that perhaps too much ground was attempting to be covered and vital aspects of what makes a good #0 issue had gotten lost in the mix. I’ll give you an example: Am I really supposed to believe that just because Selena was forced (the word “forced” is seriously up for debate) to steal, and wasn’t permitted to keep any of her findings, that it created an inherent desire in her to become a villain later in life? Just because she wasn’t allowed to keep a gem or two she turned to a life of crime? I’m sorry but I hardly buy that as a motive for all of grief she’s caused Gotham City in her career as the city’s #1 cat burglar. By portraying Selena in this light I no longer feel that sense of revenge against against the people of Gotham who had always treated her as if she didn’t exist. Instead I now see her as a brat with weak motives and that just depresses me.

I really could go on, but allow me to take a step back for a second and talk about an aspect of the book that I actually really liked. Finally, after 12 issues of Catboobs, Catass, and Catvag, Adriana Melo has decided to zip up Catwoman’s costume, doing away with her ever present, heaving cleavage shown page after page during her time in the DC New 52. Hooray? Is this really something that warrants praise? Moving on. I loved seeing Selena with her long hair and sassy ponytail. Even the younger version of Selena seen in this book looked great with her chin length raven black doo. I’m aware that the majority of the time that we see Selena in these comics she’s already wearing her costume but this was a nice change and a good look for the character. It’s my hope that when Catwoman #13 releases next month that we’ll perhaps jump ahead in time just a bit and the long, flowing hair will be kept but that might be asking too much. Julio Ferreira also does a wonderful job inking the book as the colors are vibrant and engaging throughout the story.

I wanted so badly for this #0 issue to be a great jumping on point for disappointed readers of the series as it stands right now. I wanted to be able to go “Hey, you should try reading Catwoman again because the #0 issue brought a lot to the table.” But I’m finding that all it’s done is create more problems for me as a mega fan of the character. I don’t like the direction the character has taken and I like even less that her new origin story has made her out to be even more unlikable than she’s been for the past year. Only because I love her so much am I being so harsh in this review. And only because I want great things for her am I willing to give Ann Nocenti another issue or two to allow her enough time to get comfortable writing the character, because taking on something as damaged as Catwoman is most certainly not an easy task. I’m disappointed but I remain ever hopeful and I think that’s a lot more than this issue deserves.

VERDICT: You’re better off spending your money on a box of cat litter in which to bury this issue deep beneath its scented, pebbled grains. Catwoman, unfortunately, continues to disappoint me on every level and Catwoman #0 did not do anything to restore my faith or liking of the character inside of the DC New 52 continuity.

* This review was written while repeatedly and very loudly listening to the new track “Leathers” by the band Deftones.