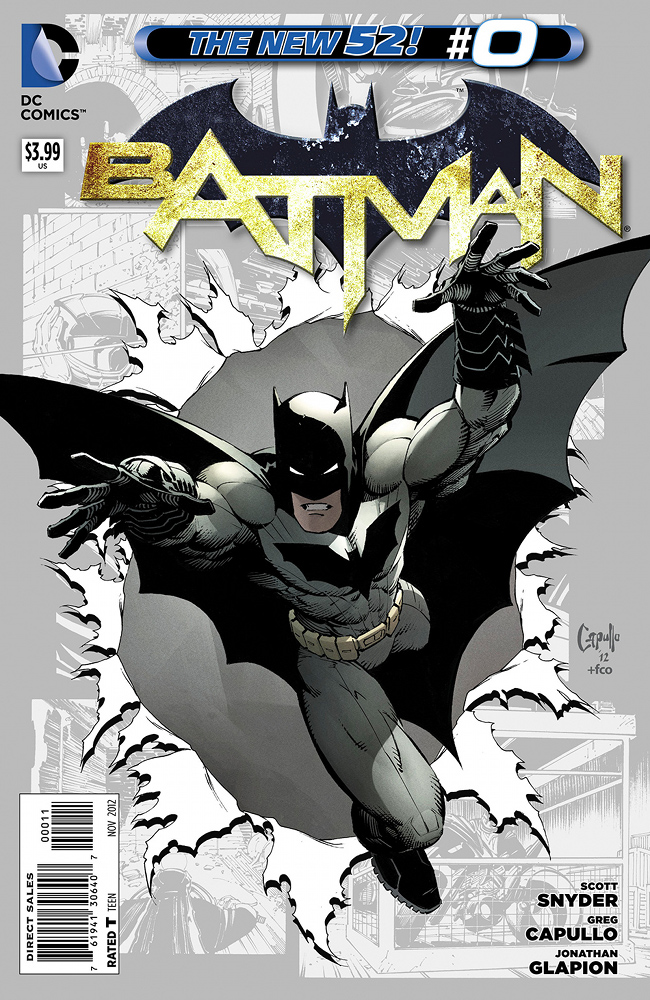 Whether it be the murder of his parent’s in crime alley, his training at the feet of the League of Shadows or his mistake filled early days back in Gotham City, the Batman origin is about as well worn as any piece of modern american fiction. It’s because of this fact that the very idea of a Batman #0 seems immediately redundant.  Scott Snyder and Greg Capullo have spent so much time building up a new future for The Dark Knight, that it seems like a waste of time to swerve off the current narrative to take a jaunt back to Bruce’s early days. Well, it seems that Snyder and Capullo agree, as their tale is not a standalone yarn about Bruce’s early days but instead is the seed of something larger. It’s these hooks and another fantastic backup from James Tynion IV that makes Batman #0 another must read in this fantastic series.

One of the most striking things about this zero issue is its inclusion of an all ready established Batman villain. That may seem an odd thing to say, but Snyder has worked so hard to build up his Court of Owls that it’s almost shocking to see the Red Hood gang make an appearance. Using this classic, and frankly ridiculously dressed mobster, in a post Jason Todd world feels Grant Morrisonesque, and I mean that in the best way possible.

Scott Snyder has excelled at writing the man behind the cowl in his run and here he introduces us to a younger, brattier Bruce. This more insolent Wayne bickers with Alfred, ignores sound advice and bites off more than he can chew. These are character traits we’ve come to expect in Bruce’s spawn Damain, and I found this link immensely satisfying.  Snyder also presents us with a conversation between our hero and commissioner Gordon that adds a nice wrinkle to their early relationship.

But while Batman #0 is a very solid issue from a great creative team, it’s the backup by James Tynion IV that left me with literal chills. Tynion leaves the caped crusader on the sidelines and instead focuses on the people he inspires. James Gordon is turning on the Bat-signal for the first time and when its symbol fills the Gotham night it sparks something in Tim Drake, Jason Todd, Dick Grayson and one other that they have never felt before. The vignettes for all of these characters are great, but after reading this, one thing has become crystal clear; we need James Tynion IV writing a Red Robin book right now! His handle on the voice of Tim Drake is pitch perfect and I want more, a lot more.

Buy It – The back up story is worth the price of admission alone, but that doesn’t mean Scott Snyder and Greg Capullo don’t knock it out of the park again. Snyder uses this 0 issue to enhance relationships we all ready know  and begin a story line he will apparently continue sometime next year. This goes a long way to making Batman #0 feel less like a diversion into the past and more like a vital cog in the ongoing story of The Dark Knight.