FacebookTwitterPinterest
We all have a character or a few characters that got us enjoying comic books and mine was Nightcrawler. He’s my favorite X-men and favorite comic book character and a few years ago after reading that he was killed during the Messiah Second Coming storyline in the X-men books, I wrote a blog about what he meant to me.

Welcome to Talking Comics’ Character Spotlight! Every other week, I’ll spotlight a character from comics, cartoons, etc. This spotlight is somewhat different from previous entries.  We all have a character or a few characters that got us enjoying comic books and mine was Nightcrawler. He’s my favorite X-men and favorite comic book character and a few years ago after reading that he was killed during the Messiah  Second Coming storyline in the X-men books, I wrote a blog about what he meant to me. Take a gander: 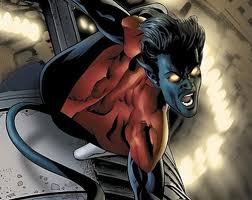 A few years ago during the X-men Messiah Second Coming  comic series, we lost a hero. No, it wasn’t Captain America or Wolverine. It was Nightcrawler. He was the bluish, elf-like and devilish looking mutant and member of the Marvel Comics superhero team the X-men. Now, he might not be as well-known as Spider-Man or as popular as Wolverine. But he was my favorite X-men and he was one of my favorite superheroes of all time. When I found out that he had passed, I was so upset. Yeah I know that he isn’t real but he was an important part of my life-He was the reason that I even got into comics. 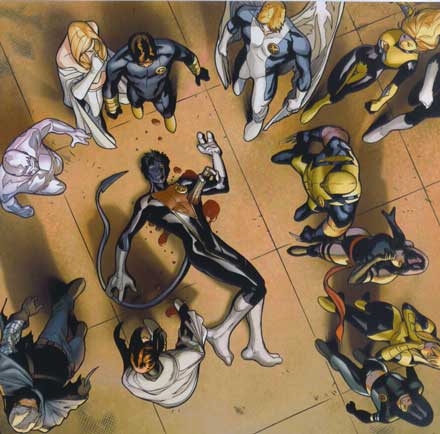 It all started when my sister and I were away on a field trip  during summer camp. I had just given up on ice skating after  falling on my butt a couple of times, and I decide to head to the  arcade to watch my friends play video games. As I was approaching them, a video game that some other kids were playing caught my eye. There were six characters that the kids could choose from.One of the characters wore a tight blue costume with a visor on his eyes  which a red optic blast came out of. Another was a female character who wore a black costume with a black cape.  She had white hair, and she could create a tornado and she also had a dagger.  Another character was a man who’s costume was metallic and it covered his entire body with a red thingy covering some of his body.  There was a woman who had on a costume that I believe was blue and her power was some type of dazzling light. Another character had on a brown outfit and on his head was a brown mask that had wingtips on the top. From his knuckles came three sharp metal claws on each hand. Finally, there was the character that caught my eye-he was blue and he reminded me of an elf and a demon at the same time. His power was teleportation. This was Nightcrawler. I watched the kids play this game for a while and then when they were done I watched the video game trailer. The game was called X-men. I had no idea who or what the X-men were, but  I wanted to learn more.

Later on, I went to a grocery store with my mom. As we passed by the area where the magazines were located, I saw the comic books. I ran up to the shelf and my eyes scanned the rows-hoping to catch a glimpse of the X-men-and then I found it. There were a whole bunch of comic book titles-from Uncanny X-men to Cable. There were also other comics that didn’t have to do with the X-men too.  But my eyes were only fixed on the X-men titles. Carefully, looking at the covers, I was trying to find the characters that had caught my eye only a few days ago…Then I found it!  The comic was called X-men Classic.  As I was reading it, I felt as though I had entered another world that I had to leave when it was time to go to the car. Even though comic books didn’t cost a lot it back then, it was something that I had to do without since there were more important things that needed to be purchased with my mom’s money such as food.

So every time I went to the grocery store, I would run to the magazine shelves, pick up copies of the X-men comics and read them.  I did this until one day when I ran to the magazine shelf, the comics were nowhere to found. This was a minor setback. I would then discover the X-men, Spiderman, and many other cartoons.  I remember on Saturday mornings when my mom had to work we would go with her and we would watch the cartoons on the TV at the office.

That’s how I came to enjoy comics. And I still do. I might not know everything there is to know about comics, but  I know that I love them.  Nightcrawler is just a cool dude. He’s more than the bluish elfish demon on the outside.  A few years ago, I had to write a poem for my college creative writing class describing a person. I wrote two poems-one about Nightcrawler and the other was about his sister Rouge. I shared the Rouge poem with the class. So for the first time, I will share the Nightcrawler poem (Copyright 2002). I hope you enjoy it.

The smell of brimstone fills the air.

Out of the shadows, he appears.

His appearance to some is quite devilish,

But they don’t know…

The kindness he shares,

The laughter he brings,

And the interest he launches…

An angel in disguise…

On  the Comicmaniacs Facebook page, one of the administrators Kitty Pop started a petition  to get Kurt resurrected and back on the pages.  Yes Nightcrawler is a part of the  Uncanny X-force team-it’s notthe Earth-616 version it’s the Age of Apocalypse Nightcrawler- but it’s not the same. How are they going to bring back Sabretooth (who’s had his head cut off by Wolverine twice-the first when he was killed by Logan’s Murmaursa blade and then again in hell) but not Kurt? You can also write letters to Marvel and hopefully we can get the fuzzy blue elf back! Below is my own YouTube video tribute to the fuzzy elf which features my poem and Adam WarRock’s  song “Nightcrawlin”.