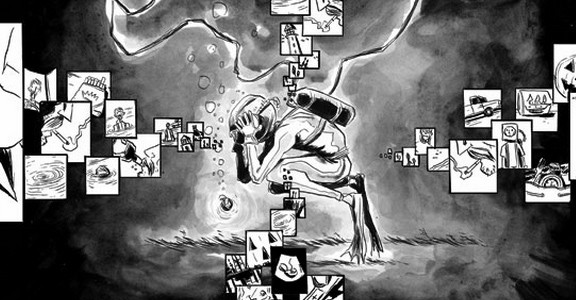 Diving Deep Into The Underwater Welder: A Personal Tale

The Underwater Welder was written by Jeff Lemire

This piece was written by Steve Seigh

My father passed away in his sleep in October of 2006. Already the victim of a stroke two years prior, that had rendered him paralyzed throughout the entire right portion of his body, my father passed quietly in his sleep on a sunny Saturday morning. There was not a single word I could find to describe my grief. The bed that I’d been laying upon while receiving the news from my already grieving sister had disappeared beneath me. My then wife, Nancy, held me as I lost myself inside of a vortex of disbelief, the black ravens of truth pecked at my body as they rode the spiraling wind inside of my brain. A life giver, a hero, a teacher, and the mightiest titan that I’d ever known to walk this earth was gone.

It’s been nearly six years now, and I as far as I can tell the way that acceptance works is that it’s something you must build. Thought by thought, brick by proverbial brick you mentally forge a home for your memories in order to keep them safe. But try as you might all memories fade with time. The faces of those your cherish most begin to blur, the layout of the house you’d spent so much time exploring begins to dilapidate inside of your minds eye, and all manner of your youth begins to decay. Those words of advice, that were once so loud inside of your ears, gradually turn into whispers carried on a faint wind. And as a result you find yourself staring back at the reflection of  someone who has become a contradiction of those cherished words. We grow up. We move on. Each day we wake up, reborn, further slicing at the umbilical noose chaining us to the ghosts that lovingly haunt our every step. We move up and out of the downward spiral because there is no other choice. We must honor these fading memories to the best of our ability. Otherwise, our personal gods have sacrificed themselves for nothing.

But what if someone can install a window for you inside of that house you’ve built? What if someone, by way of their talents and words, can rip the roof off of your precious vault and let the sun come flooding in? Two nights ago, Jeff Lemire‘s The Underwater Welder inadveertently contracted a demolition crew on something I’ve been building for nearly 6 years. In The Underwater Welder,  the graphic novel’s title character, Jack, ventures deep into the ocean in search of acceptance to his fathers death. In what is a Twilight Zone-like delivery, and in true Lemire fashion, as readers we are cast into an emotional journey that would purify even the blackest of hearts. I fell in love with The Underwater Welder and since reading it I’ve felt pieces of myself shift inside of my chest that have helped me to accept my loss in ways I never thought were possible at this stage of the grieving process. 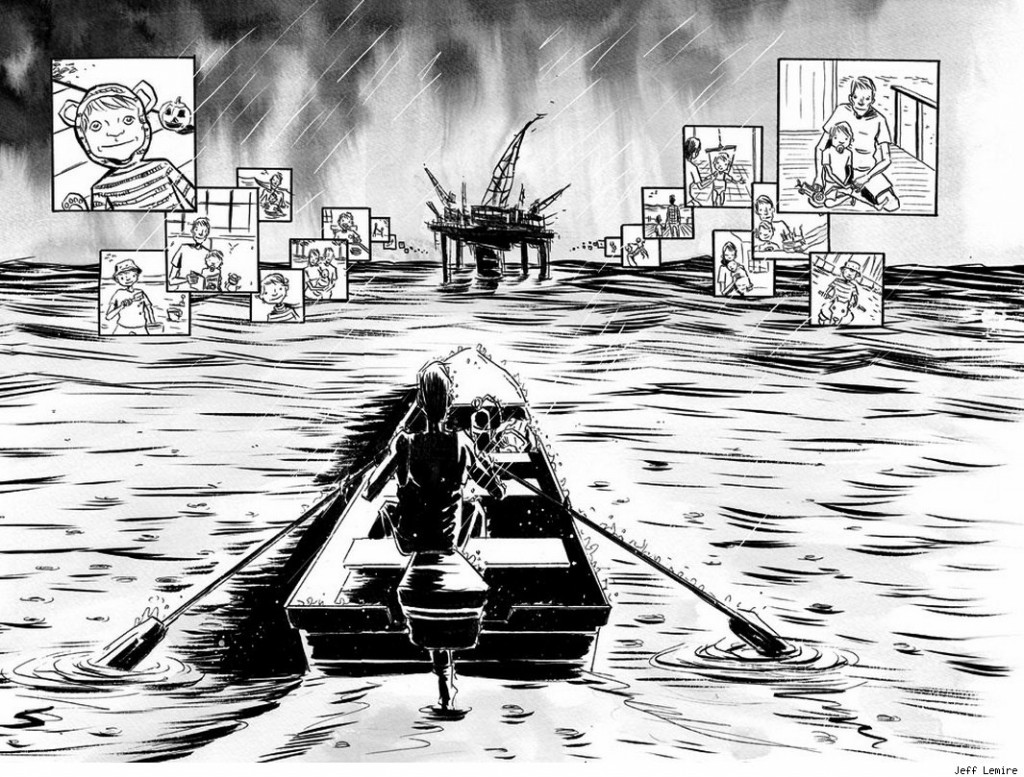 Jack’s father passed away on a cool Halloween night, my father passed in the month of October. Jack’s father was a problem drinker and it eventually led to the split of his parents. My father was also an alcoholic, an affliction that eventually led to the parting of ways between my mother and father. I tell you this only because I want you to grasp the personal resonance that a story, this graphic novel, can have on its reader. Jeff Lemire doesn’t know me, he doesn’t know my past, he has no idea what I will or will not connect to inside of his art. But nevertheless, I found an all too familiar identity inside of this story. I am not Jack, but Jack and I are more alike that I ever would have thought upon reading this wonderful book.

In the days that have followed after reading The Underwater Welder, I have felt something that can only be described as a “calm” about my father’s death. I’ve been recalling memories that I’d believed to be lost to me, I’ve been hearing echoes of his voice ringing out in congratulations about all of my latest success, but perhaps most importantly, I’ve felt an acceptance. I’ve driven myself deep into the murk and I’ve touched my own version of that old broken watch. Clarity has stormed the home that I’ve built, the one that holds my dearest of memories, and has replaced the bricks with sheets of stained glass. Now when the sun shines down on the moments I’ve frozen in time those fractured rays of light become colors. The colors add a vibrancy to these fading flickers of moments past, giving them life once more, providing light where darkness was beginning to stain.

Comics can be more than entertainment. And in a fast moving medium where new art and emotions to focus on hit the shelves every week, I wanted to be sure to document this one, so that it might go on for just a little while longer. I thank you for reading my words, and I thank Jeff Lemire and his graphic novel, The Underwater Welder, for helping me to feel something that I haven’t felt about my father’s passing in quite some time … peace.