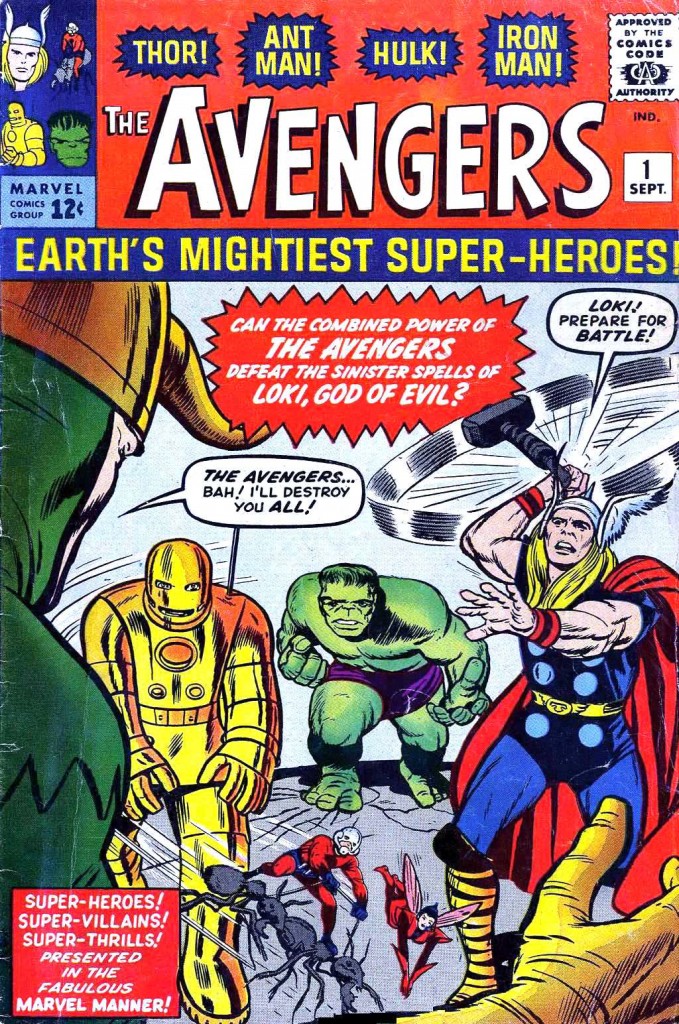 With The Avengers film breaking all sorts of box-office records, there has been a flood of pontificating on the subject of The Avengers comic book; best writer or artist, favorite character, and so on. As one who has read every regular series issue of the book since it’s inception (although my purchases began with issue #2), let me put in my two cents as to the greatest Avengers tales ever told. In chronological order, and with apologies to David Letterman (for two reasons), here are my Top 10:

No better place to start than the Lee/Kirby beginning, right!

The Hulk, still angry after leaving the group at the conclusion of issue #2, joins forces with Namor to crush the Avengers; on their way home, the group finds the body of WWII hero Captain America, locked in suspended animation. This book leads into F.F. #25/26 (and J.I.M. #112 !).

With Thor in Asgard, Iron Man, Giant-Man and the Wasp decide to take leaves of absence, so Captain America returns (from a mission to bring Baron Zemo to justice for the killing of Bucky Barnes) to find a new team of Avengers awaiting his leadership; the Scarlet Witch, Quicksilver & Hawkeye (alongside Captain America) will come to be lovingly known as “Cap’s kooky quartet”. The last few pages, as the original members depart, still gets to me after all these years.

“Even An Android Can Cry”

Beneath one of the greatest covers in Marvel’s history, writer Roy Thomas and “Avengers” artist extraordinaire “Big” John Buscema introduce Ultron and the Vision in this powerful tale that would create plot-lines throughout the Marvel Universe for decades to come!

“Brain-Child to the Dark Tower Came”

Returning from an inter-dimensional mission, Vision, Scarlet Witch, Quicksilver and Goliath (the former Hawkeye!) find themselves not on Earth, but separated from their team-mates on the seemingly-doomed  world of the Squadron Supreme, whom they take to be the Squadron Sinister (#70), but who are, instead, the greatest heroes of this world. Great parallel world science fiction, with a corker of a final page.

With the fate of the Earth hanging in the balance, the Avengers, with the aid of Captain Marvel (and a big assist from Rick Jones!) fend off two alien races in this epic masterpiece of comic story-telling!

Adapted by Roy Thomas and Harlan Ellison from a 1964 Ellison short story, this is a “smaller” tale concerning one Leonard Tippit, who is charged by the Watcher with the task of destroying five innocents in order to save all realities. This is an “Outer Limits”/”Twilight Zone” episode, told using the Avengers as antagonists within their own title!

Steve Englehart, who was writing both books at the time, bemoaned the lack of Annuals for Summer 1973 and proposed this cross-over to the higher-ups; thankfully for Marvel readers, they listened! Loki and Dormammu plot against the Earth (and each other!), forcing two super-teams into conflict over Prester John’s Evil Eye from FF #54.  Mr. Englehart brings outstanding character moments to what, in other hands, could have just been a mindless slug-fest.

Writers Jim Shooter and David Michelinie, ably-assisted by artists George Perez and Dave Wenzel, weave a cosmic tapestry around a minor Jim Starlin character, with a final battle that has never been bettered. Though my rankings change with the wind, “The Korvac Saga” is always near the top of my all-time favorite comic book story-lines!

Plotted by Marvel’s “Continuity Guru” Mark Gruenwald and Steven Grant, and scripted by David Michelinie, this touching tale of the true origins of the Scarlet Witch and Quicksilver encompasses nearly 40 years of Marvel/Timely history, with two sets of foster parents, Wundagore Mountain, the High Evolutionary, many false memories, and a small hint about Wanda’s & Pietro’s father dropped by artist John Byrne that he would expand on during his “X-Men” run.

Two “Alternate Reality” Tales Not to be Missed

Written by Peter David, with painted art by Ariel Olivetti, this two-part mini-series, set 30 years in the future, opens with Ultron-59 destroying the current team of Avengers, and then challenging his “father”, the retired Hank Pym to final combat. Possibly my favorite Hank/Jan story, it features this great quote from Mr. Pym: “…But somewhere along the way, the whole became something…wrong.  Something dark, perverse, grim and gritty”; but here within the pages of The Last Avengers Story, true love, bravery, heroism and camaraderie still shine!

With a story by Kurt Busiek, and art by George Perez, all I need do is quote Stan “The Man” Lee—“Nuff Said”!

Avengers #83 Valkyrie and her Lady Liberators!

During the tongue-in-cheek “Assistant Editor’s Month”, writer Roger Stern had the Avengers appear on “Late Night with David Letterman”, and Dave helps save the day!

Scripted by David Michelinie, who did fine work on this and other Marvel titles, here-in takes the hammer and tongs to Ms. Marvel, making her the un-wanted carrier of an inter-dimensional “love-child”, after the birth of which, the Avengers, despite evidence to the contrary, let Carol Danvers depart with her new “husband/rapist”. This debacle would later be addressed in Avengers Annual #10 by writer Chris Claremont (who had worked on the original “Ms. Marvel” series), and although it didn’t re-set things, it at least gave Carol an opportunity to express her feelings of betrayal to her once-and-future teammates, and to allow those of us readers who were appalled at the time to rinse a bit of the bad taste from our mouths.

Hopefully, my little exercise in wool-gathering will spark your interest about a few of these stories, and drive you into your LCS (Local Comic Shop) for the various collected editions, or if you’re flush, a copy of Avengers #1 or #4 !!