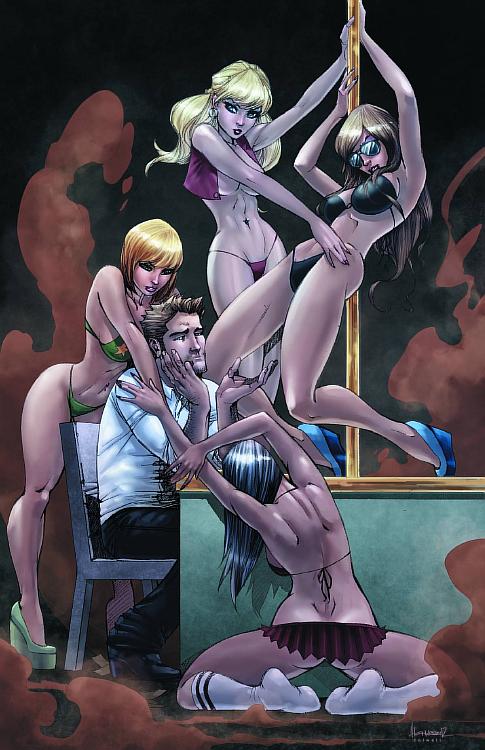 Allen Keeg is feeling pretty down in the dumps. It’s been a year and a half since his last failed relationship and as a result Allen has become quite bitter about the ways of the woman. His confidence is shot, his friends are idiots, and he seems pretty confident that it’s going to be a long time before he ever gets the chance to sleep with a woman, let alone talk to one. So I suppose it’s a good thing for Allen that after thwarting an alleyway mugging he’s granted the ability to attract every woman on the planet … or is it?

I’m not gonna lie. My first read of Irresistible #1 left me a little conflicted. While I certainly found myself identifying with Allen, I found myself bouncing back and forth as to whether or not I liked his personality. It’s difficult for me to fully immerse myself in a comic where I don’t care for the main character, and as a result of this I found myself scrutinizing Allen’s actions and dialogue much more so on the second read of the book.

However, sometimes reading things through a second time can provide you with a sense of clarity that you may have otherwise not have felt if you just accepted your initial impressions and moved on to the next book in your pile. But then again, what kind of credible reviewer would I be if I did not give the book my undivided attention? Needless to say, I found myself enjoying the book much more on the second go, to the point where I’m eagerly awaiting the next issue.

Now while I wasn’t taken with every moment in the book (something about the prison cell speech still isn’t sitting quite right with me) there are some really great moments here. I’m quite partial to the pages in which Allen is frequenting a strip club, where he proceeds to dissect the motivations of the dancers. I’ve been Allen in that situation before. Not that I hang out inside of a lot of strip clubs, but the few times I have been inside of one I’d found myself thinking along the same lines as Allen, To hear my own thoughts of these establishments and their employees reflected in Allen’s observations really won me over on a personal level. I know some of these girls are just trying to pay the bills but one has to wonder about the disassociation or “auto-pilot” mentality that comes with a line of work such as stripping.

I’m excited to see where Allen’s new found ability to attract every woman he comes into contact with will take him. I’m sure that it will start off being awesome enough. I mean really, what guy in Allen’s situation wouldn’t think that an ability like that would be amazing? But I would imagine that soon things are going to take a turn for the worse and that Allen is going to soon be buried up to his neck in ravenous, clawing women, and that’s something I’m definitely willing to stay on board with this book to see come to fruition.

“You know what what’s the best fix for a broken heart? You find a girl to break you d*ck. Ron Jeremy 3:16.” Ha ha ha! Classy stuff.

** This review was written while listening to Aesop Rock‘s album: Skelethon