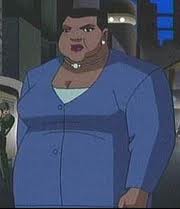 I was first introduced to Amanda Waller by watching the Justice League cartoon on the Cartoon Network and I find her to such a strong and amazing character. She’s a character who despite not having any superpowers, still wields great power. She’s not nicknamed “the wall” for nothing!

She’s one of the few women of color in the DC universe-and in comic books at large-and up until the New 52, she was a woman who was short and overweight -not skinny like every other female character-with a height of 5’1, weighing 200 lbs pre-52. Her weight wasn’t used for comedic relief, it’s what made her stand out. Waller was a not skinny, middle-aged force to be held in great regard. Here are a few things that you should know about ‘the wall’:

And there you have it my friends, another awesome kick-ass woman in comics. Stayed tuned, as there are two more women that will be featured this week, in this special edition of Character Spotlight!