I have no patience for people who make themselves about one thing. To me, race, sexual orientation and gender are only parts of a whole, they are not what defines us to the world. I apply this same philosophy to the fictional characters I come across in comic books.

I don’t care if the person I’m reading is a twenty something writer with money problems or a bisexual female super hero with daddy issues, if there is emotional truth I’m sold. That’s why I’ve always found the idea of boys not being able to “identify” with female protagonists to be such a load of crap. I guarantee you that a 12 year old boy has a lot more in common with a 12 year old girl character, than a super genius scientist who just so happens to be a giant green rage monster.

A lot of my favorite characters end up being ass kicking ladies. This has less to do with gender and more to do with the fact that I love strong, yet vulnerable heroes, and writers seem less afraid to make their subjects this way when they are female. It’s why I feel such affection for the decidedly male character of Spider-Man, who has always been about the way he feels more than how hard he can punch.

So, it is with these tenants in mind that I came to put together my “Top Ten Female Characters” list for Talking Comics. I hope that I have done the characters justice, that I stayed true to my ethos to pick characters who did not hide from their gender, but who also transcend it. 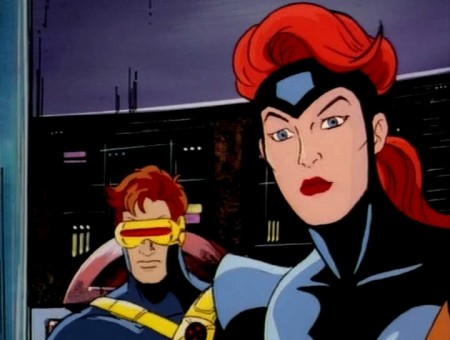 X-Men: The Animated Series is a major geek touchstone in my life. I can remember marveling (no pun intended) at the enormous universe that seemed to exist for these characters to play in.  It was probably the first time I really became aware of the power of a comic book story and none of those was as influential as the tale of the Dark Phoenix. This cosmic tale of loss and rebirth left an indelible mark on me and at its center was the tragic Jean Grey. She is not a character I kept up with, but that storyline was so powerful that she is still one of the first names on the tip of tongue when I think of female characters in comics. 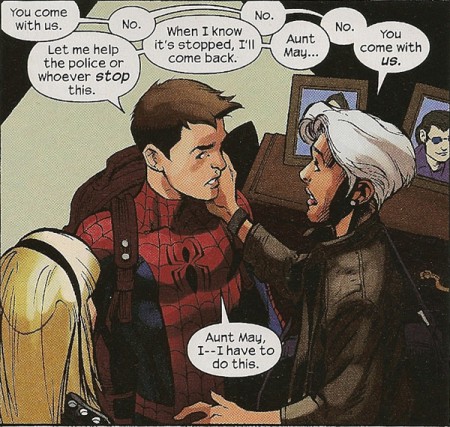 I know many of you may be laughing at this one, and yes I do realize that a lot of stories featuring Peter Parker’s Aunt are solely about an old lady in peril, but it’s impossible to love the great character of Peter Parker without honoring the person who raised him. May Parker is a rock, a stalwart fixture in the world of comic books and I think too often those characters get forgotten for the new, the flashy, and the physically skilled.

Peter Parker has experienced more tragedy than you could ever possibly wish on your worst enemy. So, ask yourself, could Peter have survived it without his loving Aunt to come home to? She has undergone significant changes throughout the years, but to me the shining example of the character lies in the may Brian Michael Bendis has completely reinvented her in the Ultimate Universe. She still retains the qualities that make her a fantastic mother to Peter, but Bendis has taken away the frailty, the naivety, and made her an agent of her own destiny.

For all these reasons May Parker makes my list, but there is also one final, and possibly most important factor, and that is this: Any man worth his salt knows, that he gets to be the person he is because of the love of a good mother. 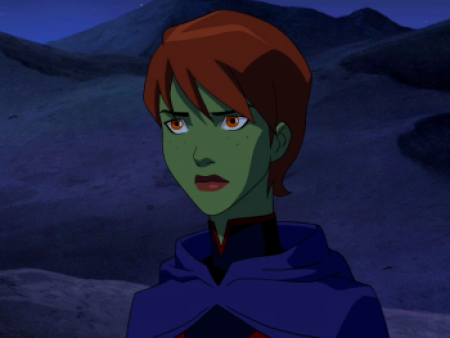 I admit this is kind of a cheat, since most of my exposure to this character comes in the form of the Young Justice television show, but regardless M’gann M’orzz makes this list because she is quickly becoming one of my favorite characters period.  Her character arc, from wide eyed optimist to damaged hero, would be remarkable for a live action program on any network, but the fact that it resides on a Cartoon Network show makes it all the more amazing.  Like all the characters on this list she has flaws that border on fatal, but she over comes them with pure will and a little mind control. 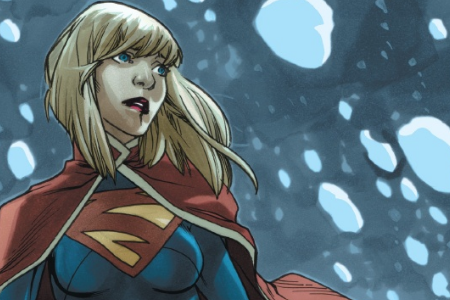 I never had much interest in reading anything featuring the fairer cousin of Superman. I always thought her to be an odd addition to a universe that all ready featured a character like Wonder Woman.  The DC New 52 changed all of that for me.  Supergirl #1 brought her back to zero and showed how a fully grown Kryptonian would react to suddenly being awoken on our earth. She may be an alien from another world, but watching her learn to use her new gifts feels no different than any young person learning to become an adult. This humanizing take has made her into, not just an interesting character, but the most engaging of anyone in the Superman family of books. 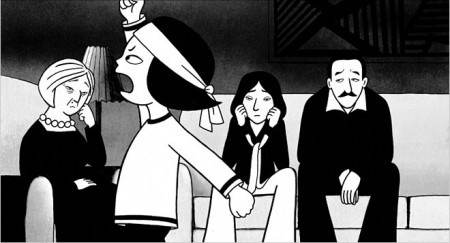 Yes, I know she is technically a real person, but that makes Marjane Satrapi no less of an amazing protagonist. I will admit that I have an interesting connection to the work of Marjane, as I spent a few of my formative years growing up in Saudi Arabia, and my mother was actually in Iran when the events that are depicted in Persepolis happened. This has led to a fascination with the inner workings of the muslim culture and Marjane Satrapi’s beautiful memoir is as a good a look as you can ever hope to get.  Satrapi is brutally honest, never hesitating to make herself look bad, and what comes out of it is an entertaining, insightful and sometimes difficult look at the mind of a young woman. 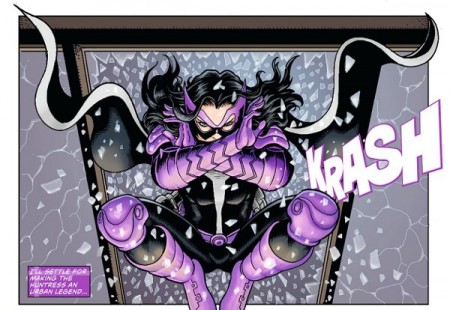 Whether the daughter of Batman and Catwoman, or a troubled girl raised by viscous killers, Helena Kyle/Bertinelli is one of the best characters I’ve discovered since returning to the world of comics about a year ago. It may be because she fits into the Batman mold of hero, as you can see from this list I’m a big fan of the Bat-family, but I’m a sucker for her particular brand of will and determination. Whether it’s her quippy current incarnation or some of the darkly serious takes from the past, I can;t get enough of this strong willed hero. If you want some quality Huntress material look to the current World’s Finest run or Huntress Year One. 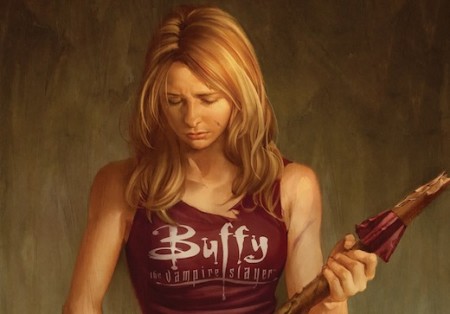 The character of Buffy Summers is easy to dismiss, she’s not the cutest, most colorful or even the most interesting person in her own story, but to write her off is to not see the forest for the trees. Buffy is the proverbial Atlas to the Whedonverse in many ways, she is the character who has gone through the most, and to whom the most is asked of. She is also a remarkably strong – both in force of will and in level of punch packing – self possessed and independent woman, who stares tragedy in the face everyday. Oh, and did I mention she also has a razor sharp wit that is as formidable as any wooden stake she way wield.

I will admit to not being fully caught up on the current run of Buffy comics, but from what I have read, it’s clear that the spirit of the character lives on and continues to be one of the best role models, female or male, around today. 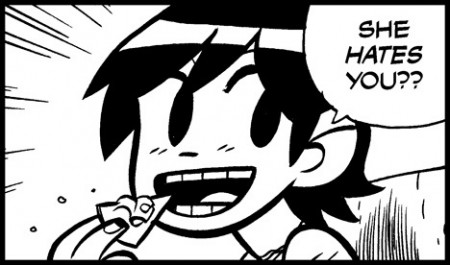 Ramona Flowers was almost on this list, because lets face it, there aren’t many male readers of the Scott Pilgrim comic book series who don’t love the hipster femme fatale. However, when I really thought about it, when I spent some good hard brain power on what I love so much about Bryan Lee O’Malley’s book, I kept coming back to one declarative statement, Knives Chau is awesome!

She doesn’t start out that way. Knives begins the series as a sweet and naive high school girl who gets hurt by a nice, but sometimes insensitive, older guy. When she does get dumped, you feel sorry for her, but it’s obvious that there is no way she can compete with Ramona in any way.

She appears to be nothing more than a stepping stone for Mr. Pilgrim, and it most books that’s all she would have been, but not here. Through the course of the 7 volumes she grows in maturity and confidence, and by the end of the story she has not only become a viable love interest for Scott, but also a strong willed and alluring character all on her own. Plus, she kicks ass, so plus. 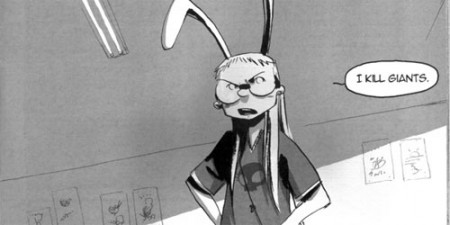 On a strictly emotional level, I Kill Giants may be the best comic book I have ever read. When I espouse phrases like “emotional truth” or talk about something “feeling real” to me, this is the kind of story I’m talking about.

Barbara Thorson is a difficult child, she acts out in school, she doesn’t get along well with others, and she 100% believes giants exist, and that she is the one who can slay them. On the surface this may not sound like something we can all identify with, but like all great protagonists, and the Transformers, there is more than meets the eye with Barbara. I find her to be a fiercely intelligent, imaginative and sensitive young woman whose emotional journey through the book left me in tears. By the end of Joe Kelly’s moving series I would have stood with Barbara through anything and that’s the ultimate mark of a great character. 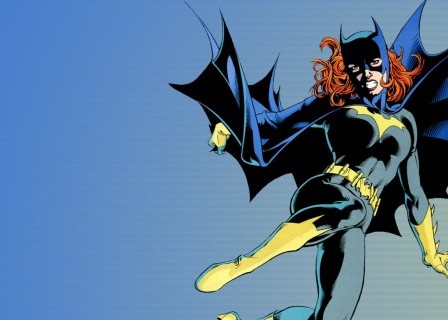 The 60’s Bat-Man TV show was in trouble, ratings were sagging and so the producers went to Batman editor Julius Schwartz and asked him to create a female sidekick for the caped crusader. Their goal was to help boost those sagging numbers, and while this stunt couldn’t save the show, it lead to the creation of one of the most diverse characters, male or female, in all of comics.

Barbara Gordon would go through a lot in her years of service to DC, the most icnonic and dramatic of which was her shooting, and subsequent paralysis, at the hands of the Joker. There is a lot of debate about which incarnation works better, but for me whether in the chair or in the cowl, Barbara Gordon is, with her heart, intelligence, and perseverance,the epitome of a superhero.