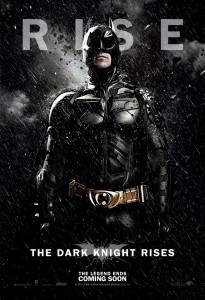 PLOT:
The Dark Knight Rises takes place eight years after the events that transpired in The Dark Knight. Batman has disappeared after said events and Gotham has enjoyed a short time of peace. Bruce Wayne has also (inconspicuously) disappeared and has turned into an eccentric recluse in Wayne Manor. However, events are transpiring that force Bruce to come out of hiding and once again take up the cowl and the cape in order to stop the menace that is Bane.

REVIEW:
By being the first of the Talking Comics crew to check out The Dark Knight Rises, I’ve taken up the daunting task of writing a review for Christopher Nolan’s third and final Batman film, The Dark Knight Rises. It’s not tricky because there isn’t enough to say about the film. Instead, it’s tricky because there’s too MUCH to say about the film. I do, however, promise that this review will be spoiler-free. I can’t quite convey to you just HOW difficult that task is… But let me just say that I’m resisting a very strong urge to just start shouting “And then THIS happened and THIS and it was like WHOA!”, but you know, with more spoilery bits.

So where does one begin in a review for a movie so epically awesome that few other words could really describe it? I guess that’s a good start.

Now, I’ll be the first to admit that I was NOT on board for Anne Hathaway as Catwoman in any way, shape or form. I felt like she was a poor choice and just blew her off as another terrible female casting choice for Nolan *cough Katie Holmes cough*. Without getting into spoiler territory, Hathaway knocks the role out of the park and she completely embodied everything that I felt both Catwoman AND Selina Kyle should. Additionally, Tom Hardy does a brilliant job in his role as Bane and his muffled voice, is absolutely not an issue as so many felt it would be. Marion Cotillard is always a joy to watch on screen and her role as the business savvy Miranda Tate was wonderfully welcomed.

If you’re a fan of the other Batman movies, you’ll know that they’re always long-ass movies, this is no different, clocking in at 2hrs 45mins. You’ll also know that they can be a bit of a slow burn. These aren’t just your typical action, superhero movies. These are instead, well thought out action dramas that happen to star characters we know and love from comic books. The Dark Knight Rises, like the previous films, also uses a bit of a slow burn. It isn’t jam-packed with endless fight scenes and mindless action. It leaves you on the edge of your seat with its psychological action. Don’t let me description that the film is a deter you though… It’s in no way a bad thing, especially if you love the other Batman films. The payoff of this slow burn comes at the end of the film and it’s such a massive payoff that almost as soon as you’re finished watching the movie, you’ll want to get yourself another ticket for the next showing.

Truthfully, there’s not much to say about the film without spoiling it, but this IS the conclusion to the Batman films that we’ve been patiently waiting four years for. Nolan delivers everything a fan could possibly want and more. Keep a close ear and eye out for a ton of subtle Batman comic book references and nods and all-in-all, if you’re not headed out to see this movie in theaters…

VERDICT:
Quite frankly, you’re a little broken in the brain.