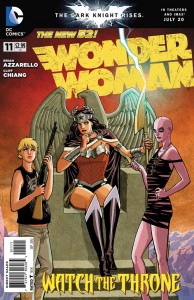 I never know what to expect from Wonder Woman each month. Azzarello has this tendency to throw me for a loop by introducing new characters, monsters, and strange family dynamics. With Chiang’s name on the cover, I do know that this issue will have amazing action sequences.

Fresh out of Hell, Diana, Hermes, and Zola take care of some everyday matters: a visit to the doctor to check on Zola and Zeus’ unborn child. In the meantime, Hera has devised a scheme to get rid of her husband’s latest bastard child. Of course, any plan made by the Greek gods has the potential to blow up in her face big time. We have to count on that, seeing as Wonder Woman now has Apollo and Artemis on her list of enemies.

While I am still upset about Diana’s new origin story (bastard child of Zeus, Amazons possessing low morals…), I do enjoy the direct ties to the Greek culture she is supposed to be a part of. Personally, I’m still coming to grips with the fact that my Diana has changed. I still can’t tell if the change is for the better, but the plot is good enough to suspend a more permanent opinion. In the meantime, I’ll curl up with Gail Simone’s run and relive the ‘good ole days’.

If you’ve been waiting to jump onto Wonder Woman, this may be your opportunity. While it is still part of a bigger arc, you can get the general gist of what’s going on from this one issue. If nothing else, you should buy it to look at Chiang’s version of Diana. It is hands down the absolute best part of her reboot.