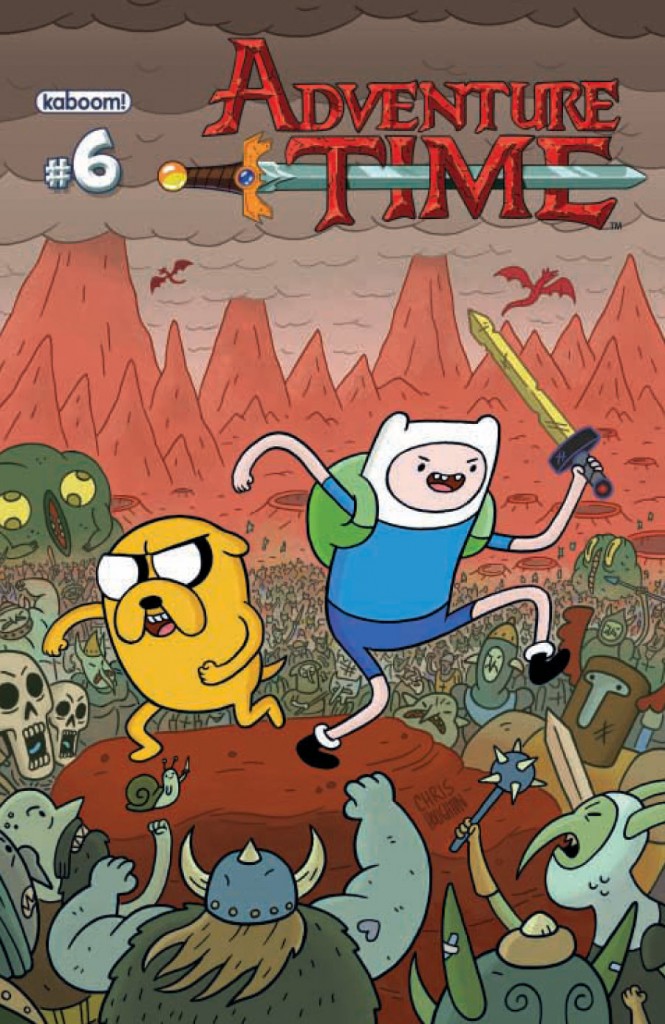 You’ve got to love Princess Bubblegum. Princesses in general are often portrayed as pompous, self indulgent brats caring only to fan themselves rather than life a finger to help their own kingdoms. But not only does Peebles (an adorable nickname given to the princess by her pal, Finn) rule over the Land of Ooo justly and maturely, but she’s also a woman of SCIENCE! Obsessed with staying ahead of the intellectual curve of the dessert oriented denizens of her kingdom, Princess Bubblegum has successfully constructed AN ACTUAL REAL-LIFE TIME MACHINE! Sorry for the caps, but she brings it out of me. She’s a very infectious character.

So of course Jake is all about this new time machine. He figures that he can just go back and correct any old mistake that he should happen to make because the device exists. This was never Princess Bubblegum’s intention for inventing the time machine and she’s of the belief that Jake has gotten out of hand. After several warnings and 88,000 KA-POPS later, Jake has made quite the mess of things for he and his friends. Can Finn and Princess Bubblegum cease Jake from his infernal time capering antics, or will the Land of Ooo be forever changed as a result of his immaturity and disrespect for the time/space continuum?

Here’s an example as to why I truly appreciate a comic like Adventure Time #6: “By shunting the temporal flux through the orbitally-opposed capacitors and bypassing the tachyon flow via an magically-inverted antihex we can achieve cross-temporal molecular replacement and anyway LONG STORY SHORT, whoever presses the button and whoever’s touching THEM is sent back in time to replace their previous selves! The time machine takes the place of ITS previous self too, which is how come there’s not two of them right now.” To which Finn enthusiastically replies, “I understand completely!!” Okay, so what was that all about? It’s a prime example of how Adventure Time blurs the line between being a book marketed toward children who watch the television show for its goofy characters and outrageous scenarios versus the adults who are able to appreciate the cerebral maturity of the property. Adventure Time #6 isn’t just a book about the abuse of time travel, it’s about friendship and the consequences of greed. Though it travels under the guise of being tied to an undeniably bizarre television show, the book often tends to go beyond just being something colorful to read. With plenty of inside jokes tied to the cartoon show and often hilarious footnotes from the books writer located at the bottom of every couple of pages, Adventure Time #6 never tires of urging you to become doubled over with laughter.

The only deterring factor I’ve found about Adventure Time #6 is the dependency it has on its readers knowing the already established friendships from its television counterpart. Young readers might not care as much, but I would imagine that someone who is looking to simply explore Adventure Time (the comic) might end up feeling a bit cheated. The book assumes that you already know these characters and how they interact with one another. How else would you know that Princess Bubblegum is a scientist in her spare time, or that Finn has developed a hardcore crush on his royal friend and would do just about anything to impress her? Adventure Time is also a property that has managed to build its own language over time. Many who aren’t familiar with the show could end up finding certain words confusing and could possibly end up feeling left out of the joke that’s otherwise very obvious to long term fans.

* There is also a short but sweet mini-comic near the back of the book entitled “Level 99” which stars Finn, Jake, and Lumpy Space Princess. It was written and illustrated by Anthony Clark. Was it any good, you ask? Well, how could anything with Lumpy Space Princess possibly be bad?

At the end of the day Adventure Time #6 is yet another satisfying and hilarious read for anyone looking to get their Finn and Jake fix between episodes of the show. You might end up feeling a little cheated if you’re not a fan of the show, but I would assume that if you’re buying something like Adventure Time #6, you must already be a fan.

If you’re a fan of the Adventure Time television show than the decision to purchase this book is a no brainer. There simply is no such thing as too much Adventure Time and it would be pretty mathed up if you didn’t go out and give it a read. However, those who are not familiar with the show might want to tune in prior to reading this comic if you want to get your full enjoyment out of it. Not that it isn’t hilarious on its own but it will certainly help clarify the relationship dynamics between the characters as well as the overall nature of The Land of Ooo.