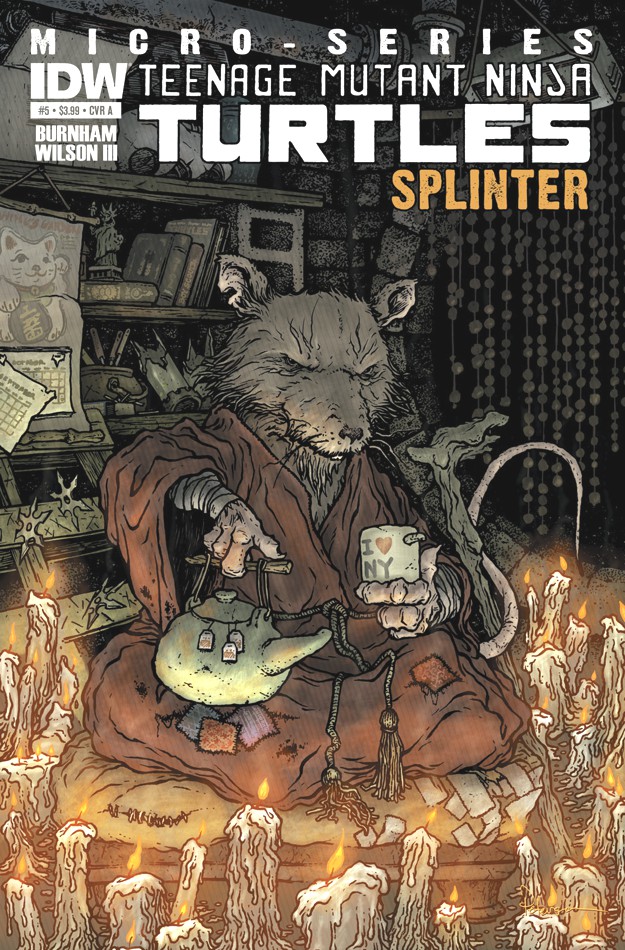 Kevin Eastman and Tom Waltz have been absolutely killing it on the Teenage Mutant Ninja Turtles. It’s easily one of my favorite books month in and month out. However, the same can’t be said for the Microseries that is running along side the ongoing. Each book is a little vignette into the personalities of an individual character. Splinter is the latest of our main characters to get a one shot, and it delivers on every level.

This issue is written by Erik Burnham, and is a fantastically long-winded story. Even though there are a ton of words strewn about the page, it isn’t a difficult read. It is actually a pretty fast read considering how much is being thrown at you on a given page. The story picks up where issue 10 of the ongoing series left off, and we get to see Splinter be a complete badass as he decimates the Shredder’s Foot clan. Interrupting the awesomeness of rat fist to ninja face action, we get an expanded glimpse of Splinter’s former life as Hamato Yoshi. Burnham uses these flash backs to flesh out Yoshi’s past marriage and adds a twist to Splinter that we haven’t seen before. Turns out the Zen master used to punch first and ask questions later. The progression of the character in this issue comes full circle leaving us with the Splinter we all know and love, but it isn’t without adding an intriguing new wrinkle to his make up.

The art in the TMNT proper is something to get used to as it is very stylish, yet effective in taking you out of reality and putting you in a world where cats, rats, turtles and talking brain aliens can walk, talk and fight like a 1980’s Jean Claude Van-Damme flick. Charles Paul Wilson III keeps the aesthetic close to what we get in the main series during the parts that take place in present day, but in the flash back sequences it’s a whole new world. The art takes on a stunning Japanese art style, and it is worth the 3.99 alone. The characters are extremely emotive in these pieces and very effective in driving the touching story home. The entire art team shines here– as even the pages get an aged paper look to them, and it is this kind of attention to detail that makes Wilson and Petersen’s work jaw dropping. All around the artwork in the flash backs are phenomenal. The only down side to the stark contrast between present and past is that it makes you appreciate anything done in the present day style far less than you would if the entire book was done that way.

Verdict
Buy it– As a whole this microseries is not a must have for most, but it is a nice insight to the main characters. And while the previous issues haven’t been as good as the main series, they have all had some redeeming qualities. Teenage Mutant Ninja Turtles Micrcoseries #5: Splinter is the first to come off as a must read. It’s a fantastic addition to the world the people at IDW are building for the heroes in a half-shell, and I would gladly find in my budget 4 more dollars a month for a mini series based entirely on Splinter—and there would be no questioning the purchase if it could provide top notch art like Wilson and Petersen gave here.