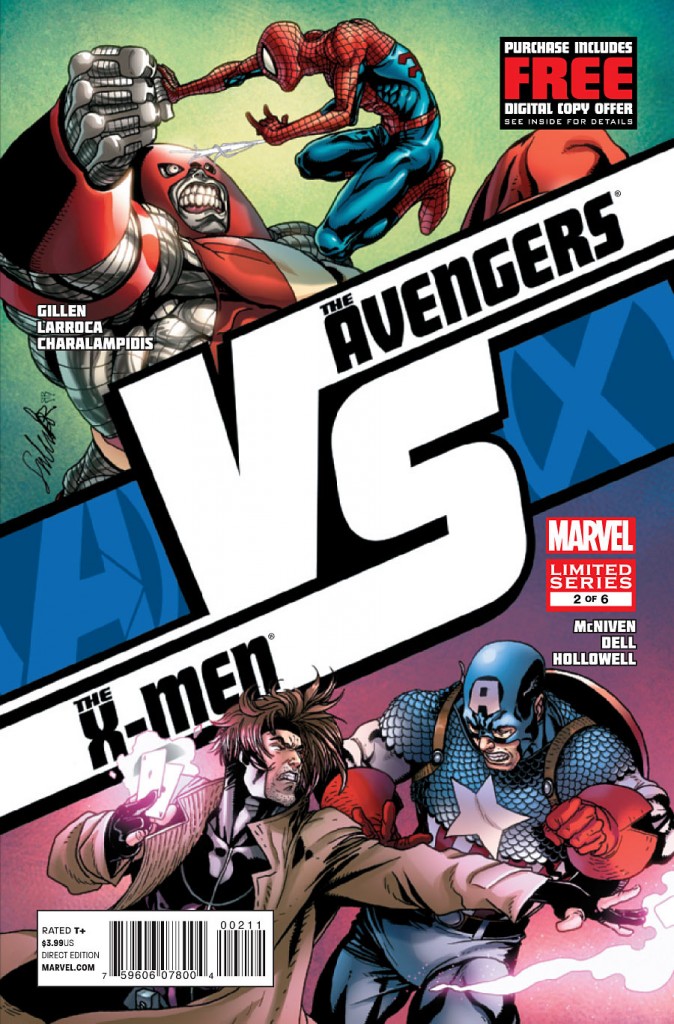 The Amazing Spider-Man vs. Colossus

In this corner we have Captain America! He stands for truth, justice, and the American way! And in the other corner we have Gambit! This member of The X-Men can charge potential energy into kinetic energy, leaving matter explosively unstable! Yes folks, it’s Uncle Sam’s Mightiest Super Soldier versus The Raging Cajun! Who will win out as we enter Round 2 of The Avengers vs The X-Men stand-off battles?

The thing about this particular tie-in to the whole The Avengers vs The X-Men event going on right now, is that right from the get go the books outright warn you that this is not a book of substance. Now, while I appreciate the heads up, it would be nice if this particular reader got a little more bang for his buck. For my money, the battles contained in this issue were just not entertaining enough. While the fight between Captain America and Gambit certainly had a bit more flair, it was kind of hard to get over the idea of Cap (more of less) being on his cell phone (built-n head piece) throughout the entire scuffle.

It might have been a good idea that for a series claiming to have very little dialogue, that the dialogue at least be engaging when it does come into play. Though, I will say that for my few hang ups about this particular bout, the art is fun and has a good sense of movement to it.

And now, for our second battle of the issue! Spider-Man versus Colossus – in what’s sure to be a knock-down, drag-out fight … right? Meh. I gotta tell ya, for a battle between one of The X-Men’s strongest allies and The Avengers resident wisecracking wall crawler, I thought the fight was quite boring. Colossus flashes an angry sneer, Spidey makes a pretty lame joke or two, he spins a few webs, Colossus bares even more teeth … blah. I’m sorry, but I find it hard to believe that this is what readers had in mind when they were anticipating a new battle between these two titans of the printed page.

VERDICT: What can I say? It’s part of the whole The Avengers vs. The X-Men event, so you’re probably going to want to pick it up. Would I say that it’s a great issue and you should totally own it? No. The fact of the matter is that there are a lot tie-in books to this whole event and some of you might be wondering where to spend your money. I personally feel like this is not one of those times. However, this is merely my opinion, so by all means seek this issue out. And hey, if you love it you could always come back to this review and tell me I suck. Happy reading!