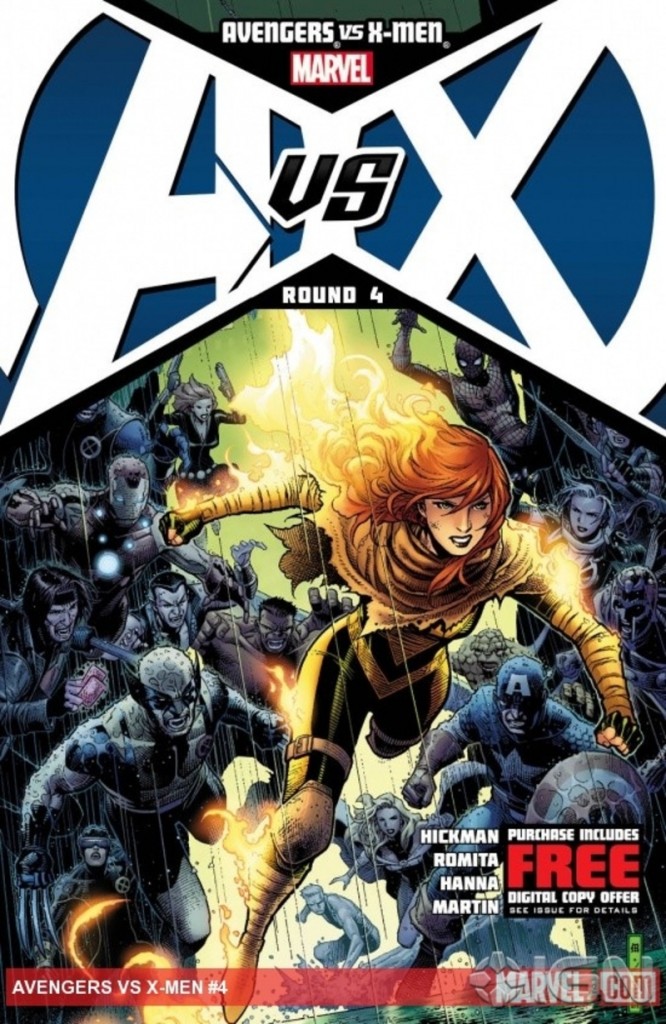 Well, here we are again–another week, another installment of AvX and/or it’s various ancillary titles—ho hum. I know that I’m supposed to be “geeked up” about these things, but I think I’m past my expiration date for these “events”. I must say that for AvX #4 I was willing to overcome my ennui as one of my favorites, Jonathan Hickman (he of the currently “Fantastic” Four) was on board as scripter, so with hopes higher I plunged head-long into the unknown.

Now, let me just say that excepting his relatives, I’m one of Mr. Hickman’s biggest fans, and there are some great moments contained here-in (that I will catalog later, never fear!), but the sad nature of the beast with this sort of cross-over is repitition. There are quite a few “check-ins” on the happenings in Avengers, Uncanny X-Men and AvX: Vs., and for the most part, they stop the story cold. Unfortunately for you and me, gentle reader, the smaller “human interaction” bits that are being cut away from are much more interesting than two or three panels of Avengers and X-Men throwing punches or firing ray beams at each other—if the action sequences were more fully fleshed out in terms of the give-and-take of combat, or we share in a heroic, desperate moment with everything at stake, it might be a better balance.  As it is, this over-lap distracts from what could have been a typically grand Jonathan Hickman outing.

Mr. Hickman does his usual fine job on those “personal” scenes here; Hope and Wolverine share some especially poignant dialogue as they plan out an end-game scenario, and both leadership “couples” (Emma/Scott and Cap/Tony) have their chance to shine, but the story shifts focus to the various melees, and the moments are lost in the haze of a battle that ultimately will have no clear victor.

John Romita, Jr.’s art is, as usual, quite good, and positively shines in those smaller scenes that I’m championing here. I’ve sometimes felt that Mr. Romita’s art is a bit static, but that quality serves this story well by letting it “breathe” when it needs to, so I would be very intrigued to see a Romita/Hickman project that took place on a more intimate scale.

There is one page that I don’t quite get—Thor tosses his hammer at the Phoenix force to no great effect, and then hangs awe-struck watching…a planet explode… Phoenix come to ground… Macy’s Fourth of July fireworks? I suppose it’s a re-work of a scene from Secret Avengers #26, but it’s not from that issue, that I can tell. There is one of those cockamamie AR digital thingies on one of the panels, so maybe I need to get an I-Pad to see what’s going on (which seems like a gyp).

This issue is O.K. for what it is—a holding action, or the calm before the up-coming stormy conclusion. No matter what, as I’m sure that you will, I’ll be back for AvX #5 and #6, as I now have money and time invested in this story, but I have a sinking feeling that this whole mini-series will end up in a long white box, and never see the light of day after I’ve completed reading it.

Having just re-read a ton of great Avengers stories in the past week for my Top 10 Avengers Stories article, this series pales in comparison to arcs such as the Avengers/Defenders War, JLA/Avengers, or the battles with the Squadron Supreme/Sinister, all of which are certainly worth your time reading!