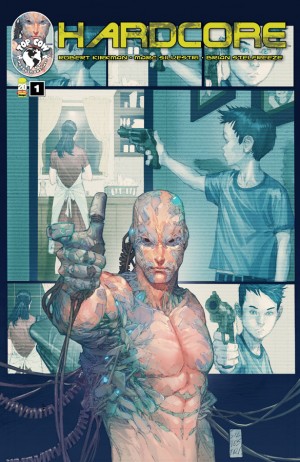 The idea for Hardcore is pretty elaborate, so a good chunk of this Issue #1 sees writer Robert Kirkman (The Walking Dead) trying to explain just what the book is all about. The title itself isn’t a reference to anything in this story being “hardcore” but is instead named after a tool that the main character of the story, Agent Drake, uses for his government sanctioned assassination missions.

The comic cleverly uses a visit from the Department of Defense as a way to explain how things work and what has been going on in the story thus far. The story thus far is this: Once the hard core is shot into the back of your neck, an assassin’s brain waves can be transmitted into your body–circumventing your brain functions–taking complete control of your body. When assassins use this technology–your killer can be anyone; your barber, your neighbor or your wife. They are the best assassins in the world–but what happens when one of their own turns against them? Who can you trust when your enemy can change his appearance as easy as someone changes a shirt?

It’s a complicated thing to explain in the comic and the DOD visit helps to make sure that the information that’s being relayed to you is absorbed interestingly. It outlines what we need to know without making it seem like we’re just being talked at. It’s obviously to explain things and to set everything else up, but it doesn’t feel like it’s just a device put in the story for that purpose. It additionally helps build up our protagonist’s personality and gives us a better feel for what kind of agent he is… and for the record, he’s an agent that gets shit done whatever way he has to.

However, what initially builds up as a story that will lead into a series of futuristic government ops turns into something else entirely. What could’ve been a book like Nathan Edmondson and Mitch Gerads’ The Activity, instead takes a turn into a survival story that I assume will eventually lead to be a revenge/justice-must-be-had kind of story.

Verdict
The issue is perfectly written as a set up to what’s been going on in the world and then kicks it up a notch as it finishes on a note that leaves you immediately wanting more. The art is great, the story is great and Kirkman definitely doesn’t disappoint with this Issue #1. If you’re looking for an interesting thriller to get into in comics, Hardcore delivers the goods.