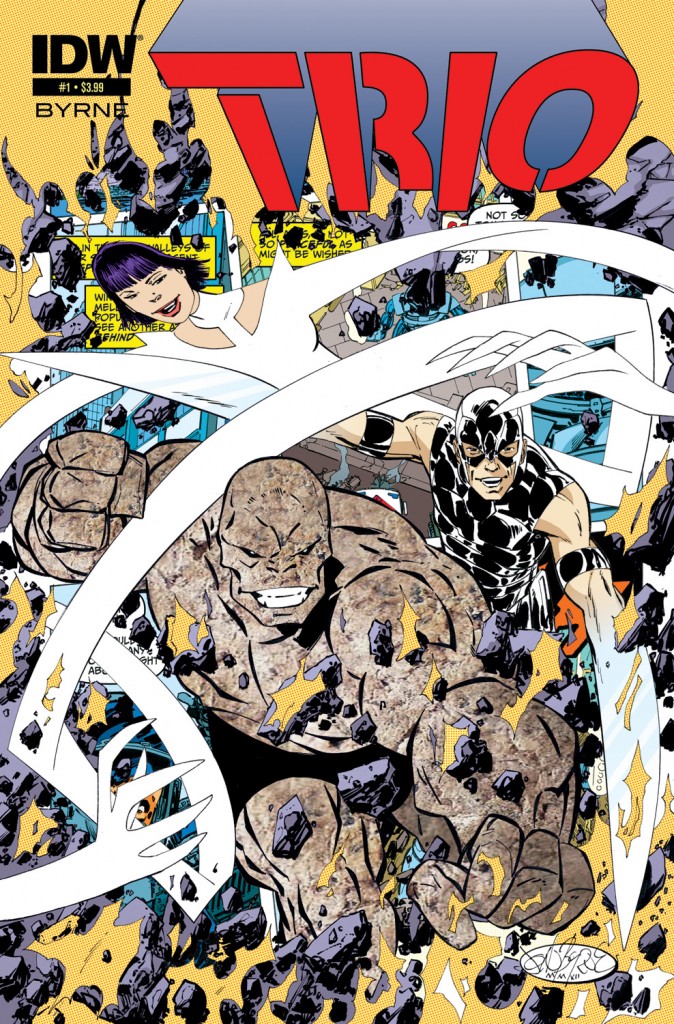 With Trio, his new project for IDW, master story-teller John Byrne brings to vibrant life a cast of characters that are familiar super-heroic archetypes, but throughout this opening chapter the classic elements are re-combined into an entertaining, all-age mix that both harkens back to Mr. Byrne’s epic runs on Uncanny X-Men & Fantastic Four, whilst also being contemporary and adult—albeit without the current penchant for “darkness”.
The book opens in the middle of an action sequence (an old-fashioned “super-villain bank robbery!)” that quickly and succinctly introduces our leads and their abilities, as well as the notion that there seems to be an ambivalent relationship between the authorities and super-heroes.

Within this first issue, we are given minimal information regarding the heroes code-named “One, Two and Three”, but instead of feeling “strung along”, Mr. Byrne uses smaller, quieter moments to provide insight into the characters that will, based on his past work, have a textured pay-off as the story moves forward.
The quick cut-away to a sub-plot that will be the major event of the next issue, is a nicely done bit of business that serves to heighten tension about the scene we’ve left, while also giving the reader a creepy “Universal Horror” moment that bodes ill for issue #2.

As is my usual wont, I’m loathe to divulge any great detail on a book many of you have not yet read, preferring to give you the opportunity to explore for yourselves the nuances of a fine, well-written book.
The writing, in Mr. Byrne’s eloquent, crisp style hits all the right notes, with captions that enhance and amplify the story without seeming redundant, and judicious use of dialogue to delineate character; in one instance we receive all we need to know about reporter Phil Creslar in just two scraps of dialogue. As an aside, it’s also great fun to see classic comic book sound effects again—“SKRUNNTCH!”, indeed!

It goes without saying that the art is very, very good; dynamic page/panel lay-outs that never interfere with the forward thrust of the story, cinematic transitions to new “camera” angles and the typical focus on individual, expressive faces and the attention to detail that has been Mr. Byrne’s hallmark throughout his distinguished career. These elements combine to create a densely layered work that you’ll find yourself going through twice to see what you’ve missed. I would be remiss for not mentioning the colors by Ronda Pattison, who was also responsible for Cold War & Next Men, who here fashions a pallet quite different from either of those, one quite evocative of classic 1960’s Marvel in her use of grays, browns and darker tones.

VERDICT: Cold War was a clever spy-thriller, and great fun, but it’s good to have John Byrne at work on an original super-hero comic. I can’t wait to see what he has in store for these characters, and if you’re at all a fan of classic super-teams, you’ll be here, too!

ADDENDUM: A nice quote from “Two”—“Good guys don’t kill people. You should know that.”