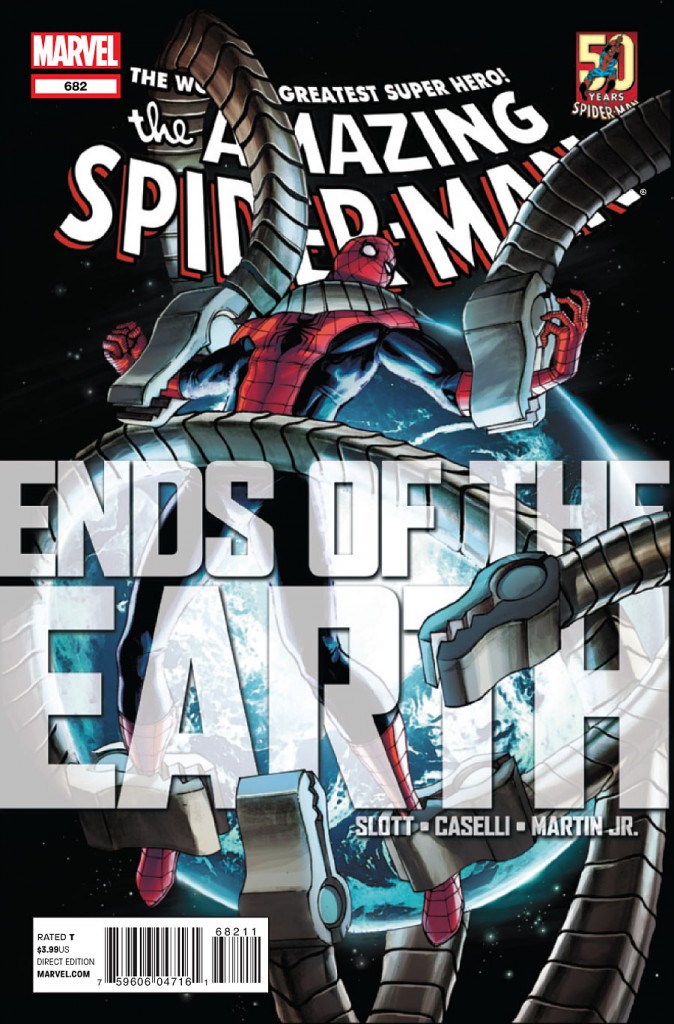 One of the greatest things about Spider-Man as a character is his unwavering dedication to simply doing the right thing. He’s not an antihero and he doesn’t do morally questionable things in service of the “greater good.”  To Peter Parker the world is made up of a black and white truth, there are heroes, who try to make the world a better place and there are villains, that look to do the world harm by twisting it to their own selfish needs. This almost childlike dedication to ideals is both the wall crawlers greatest strength and his most glaring weakness.

This double sided trait seems to be on center stage for Ends of The Earth, the new Spider-Man event written by Dan Slott, that sees a dying Doctor Otto Octavius trying to construct one final master plan before his untimely demise. The twist is that plan seems to be to save the world, not destroy it. You see it seems old Otto has grown a conscious in his waining days and has decided to impart to the world a way to stop global warming. Not buying it? Well neither is Spidey, but much to his surprise the world does not share his skepticism of this sinister super villain.

This dichotomy of view points is at the core of what makes Amazing Spider-Man #682 so engrossing. I’m almost sure that Dr. Octopus is up to no good, but thats the thing I’m almost sure. There is a part of me that believes that Spider-Man is blinded to the truth by his past encounters and that maybe a dying man simply wants a sliver of redemption before he passes on. Is it more likely that he’s actually out to end the world? Yes. But that modicum of doubt is what makes this first issue so satisfying.

Add to that the joy of watching writer Dan Slott continue to nail the characterization of both Peter Parker and his masked alter-ego. Slott has a gift for not only fusing Peter’s innate genius into his web slinging duties, but also crafting some truly hilarious quips for Spider-Man to spout during his adventures.  After that you can feast your eyes on the sumptuous art by Stefano Caselli. I was especially captivated by his panel designs which gives the reader the sense of seeing a film in epic Cinemascope. I’m genuinely excited to see where this team takes us next.

This is a good place to start reading because it is kicking off an arc. That being said, a standing knowledge of who Peter Parker is and the fact that Spider-Man is a member of The Avengers would help you. If you need refresher why not check out our Start Reading Here column from a few months back.

Buy It – If you enjoy the mix of action and humor that Spidey provides you can’y go wrong with Amazing Spider-Man #682.  It is a sharply written and intriguing start to Dan Slott’s latest Spider-Man event that promises plenty of surprises to come.