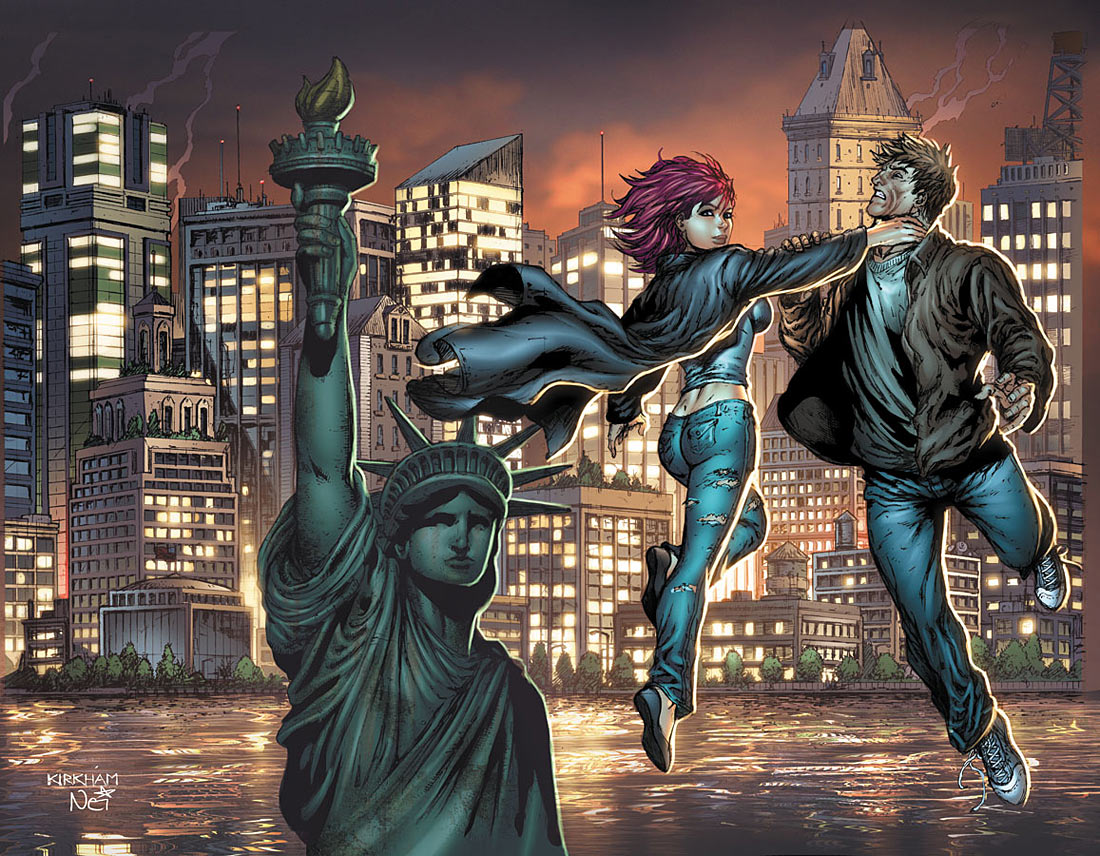 How would you react if someone you trusted offered you the ability to be able to fly? Imagine, a sensation that has been dreamt about probably since the first man fell asleep, and it could be yours. Though some things are simply too good to be true, and it’s well within our addictive nature as human beings to abuse something so wondrous. In fact, there are some things that are simply not meant for us. What if someone you loved gave you this power, and it was that very same person who is also willing to take it from you?

Such is the story of Eddie and Danielle in Zenescope’s series written by Raven Gregory: Fly. Unlike any other Raven Gregory written series that I’ve read this one certainly stands out as being the most unique. I’ve grown accustomed to the witches, monsters, and things that go bump in the night that my experiences with his work have always given me, I find an odd solace in that kind of stuff. But it was when I opened Fly that I’d found a most pleasant surprise as I knew right away that this was going to be something different.

In what’s essentially (at least it was for me) a Super Hero story, peppered with moments of passion and pure exhilaration, Fly brings monsters to you in a different way altogether. You don’t always need horns, jagged teeth, or a tendency for dining on human flesh to be considered something dangerous and unpredictable. All you really need is the right motivation, something that forces you over the edge. Fly is a book where our human characters are the monsters. Packed with super powered action pieces, emotional turns of the table, and a power hungry hunter lurking within the shadows,  Fly is a series that I can’t believe I missed on the first round. Thank goodness for trades, right?

Aside from having me fully invested in each character by way of their actions and personality, something that needs to be mentioned is the rich and colorful art of Eric J. I absolutely loved the contrast in styles that were used to tell the story of Fly. Back when things were much simpler and perhaps innocent, we’re treated to a very lighthearted approach at depicting the better of times within the story. Having an almost Saturday Morning Cartoon flare to it, Eric J fools you with his gentle approach to the character’s past. He makes you feel safe, makes you think that things are going to work out for the better. But this is Zenescope we’re talking about, there’s always some form of a lesson to be learned from each of their stories. There is this one panel in which Eddie and Danielle fall for one another, each of them is surrounded by hearts, and as the passion within the moment grows, so does the art. It’s pages like these that really sell the illusion of being safe inside the story. But like I said, this is Zenescope, and you should know better.

Soon enough we get into the more gritty end of the story. The pages suddenly become hurt and filthy. The illusion is broken and we’re back to reality, a place where lives are in danger. Each page is filled with deceit as the characters fall further down their own personal rabbit holes. It’s this balance of light and dark for the art of Fly really does compliment the storytelling so much. I am eagerly awaiting the return of Fly when it hits shelves in 2012. How would you feel if the person who made you feel the most alive you’d ever felt in your whole life, wanted to destroy you? That’s what you’ll have to ask yourself as you shoot some Fly into your veins. You’d better  hope that there’s enough, so that when you’re at your highest … you don’t suddenly come crashing down.

Raven Gregory is at it again with his unique writing style and killer artists in his corner. Fly will do just what it promises … but there’s always a price.

Buy it – Truly having a different feel from many of the other popular Zenescope books, Fly will get you off and leave you with a final page where you find yourself screaming, “Oh man! What the hell? When does the next issue come out?”