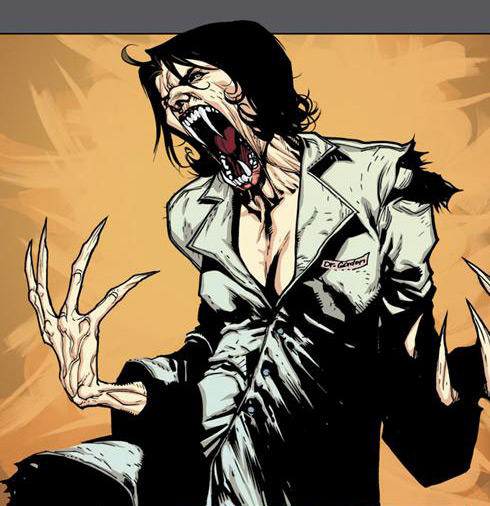 Many people, including me, believe that the vampire genre is getting extremely tiring.  It’s seriously out of control and I for one am ready for a change.  Heck, the whole supernatural genre is a little out of hand in general, but vampire culture, more so.

With that being said, American Vampire Vol. 1 is an incredible breath of fresh air.  Both Scott Snyder and Stephen King write the first volume, however they don’t write bits and pieces of the same story.  The first volume of American Vampire consists of two intertwining stories, one set in L.A. in the 1920s (written by Snyder) while the other (written by King) is a western set in the 1800s.  Snyder’s story follows a young actress named Pearl, who meets a terrible end, only to wind up with a dark new beginning.  King’s story is again, a western, which revolves around the biggest, baddest outlaw around, Skinner Sweet, a man with already very loose morals who accidentally becomes a whole new breed of vampire.  The two stories only briefly intertwine, but are mostly their own entities.

The writing is absolutely amazing in this story and the illustrations, provided by Rafael Albuquereque, are truly terrifying and could definitely inspire some creepy nightmares.  He does such an amazing job of bringing the words of Snyder and King to life and giving a fantastic look to these vampires, sans sparkles.  Now, as I mentioned, the vampire culture is exceptionally out of control, but if more people could come up with works like this, I would definitely be allfor everything henceforth being about vampires.

Nada.  Some brief knowledge of vampires may help make this story more enjoyable, but it’s not necessary.

American Vampire Vol. 1 is 110% worth buying… I personally can’t wait to go pick up the next volume to read to see where the story goes from here.