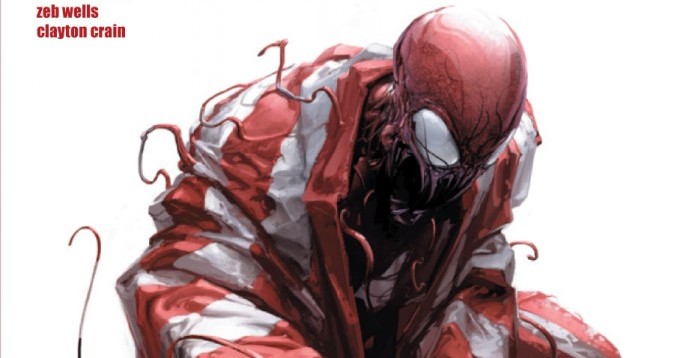 In the formaitive years of my life I was greatly influenced by the media that sprung from comic books even more than the comic books themselves. The 90’s era Spiderman cartoon series enhanced my love of the character and introduced me for the first time to the symbiotic Venom. As a pre teen I fell in love with the character’s dark beginnings and severe design. I was also enamored with a Super Nintendo game called Maximum Carnage. The cartridge for the game was red (cool) and it featured a snarling grotesque character I had never seen before. When I discovered he was Venom’s offspring I decided this was a character to follow.

In the years since then I have grown slightly weary of the very 90’s design I at one time loved so much. Yet even with my years of maturity and cynicism I found my curiosity peaked by the site of Carnage U.S.A. on the shelves of my local comic book store. The cover is striking not only in it’s overall mastery of design but also in it’s powerful use of iconography. I don’t often buy books based on their artistic merits but this one came damn close. In the end though it was the name of the writer, Zeb Wells, that got me to fork over the money for this issue. Even after my purchase I worried that I would be facing down an immature and overly violent exploitation piece. I’m glad to report that, while the book has it’s share of extreme violence, it surpassed my expectations in almost every way.

Zeb Wells brings the same crackling wit he imbues so strongly into Avenging Spider-man along with him to Carnage U.S.A. #1. The interactions between the members of The Avengers have Hawksian levels of wit and charm. (The ribbing of The Thing by Hawkeye is especially wonderful.) This stands in sharp contrast to the psychotic ramblings of Cletus Kasady a.k.a. Carnage. Wells paints him as a creature who has absolute confidence in how evil he is and in his ability to spread that evil wherever he desires. His starting point is the small town of Doverton, Colorado which Mr. Wells has crafted into a character all it’s own. My best comparison is to that of a community in a Stephen King novel. Which, considering my love for the master of horror, is a sizable compliment.

I’m not usually one to critique art because I feel unqualified but Clayton Crain’s work is hard to ignore. His pencils at times reache such photo realistic peaks that I believe I’m actually watching Spider-man swing through the air. He also utilizes depth of field in a way I’ve never seen in a comic book. I feel like I’m watching a story shot with real lenses, real cameras and physical lighting. This filmic look only adds to the tone of horror because it feels all the more real when Carange terrorizes Doverton’s poor citizens.

What You Need To Know
The only things necessary is to understand that their is a history between Spider-man and Carnage. The other details like the current members of The Avengers and such are non essential.

Verdict
Buy it- I could recommend it on the art alone but there is no need since Zeb Wells strong writing makes the book a joy to read from beginning to end. If you hate Carnage you may balk but it is regardless one hell of a book.