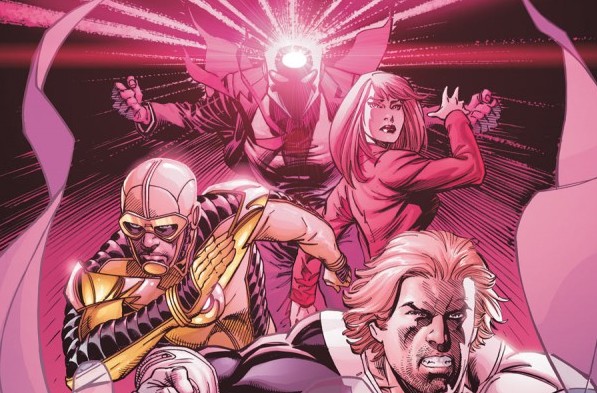 What a bizarre week. DC Comics has decided to take a brief intermission from releasing New 52 books so I was left searching for comics to read and review. While flipping through the digital store front I came across T.H.U.N.D.E.R. Agents #1 the first in a six part miniseries taking place outside the new universe continuity. Being that it was  a number one I investigated further but to be honest I did not expect to actually pick this title up. I’m reading an awful lot of superhero books and the last thing I wanted to do was to add another one to the ever growing pile that sits in front of me. That was until I read the description.

“T.H.U.N.D.E.R. — The Higher Untied Nations Defense Enforcement Reserves — is charged with tackling the kind of threats most superheroes don’t even know exist. To accomplish this, they empower their agents with special abilities — abilities, however, that will eventually kill them. What kind of men and women would pay such a steep price? These are T.H.U.N.D.E.R. Agents.”

How cool is that? I love the idea of men and woman who want so badly to help make the world a better place that they sign their own death warrants. Granted in some way or another it’s a quandary that all superheroes face. They know they live dangerous lives that could lead to their demise but none have a constantly ticking doom clock. So, I bought the premise but did I buy the bit?

The short answer is, yes. Nick Spencer’s writing is fluid and fun. It easily flows from dower to silly without feeling forced or fake. The real achievement is that he handles a metric ton of exposition with an easy grace. There is enough information in T.H.U.N.D.E.R. Agents #1 that, in less capable hands, could make the reader feel overwhelmed. That never happens in this issue. The art by Wes Craig is good but brings nothing exceptional to the table. It’s very classic, very safe comic book work and while it does not add to the story it certainly doesn’t hurt it.

The main problem with T.H.U.N.D.E.R. Agents #1 is that it’s not really a number one at all. It picks up straight from a previous 10 issue run and that’s very evident. If you go in thinking that you should understand everything you will get frustrated very quickly. However, if you go in to this knowing that there is previous chronology, and just accept that you will either have to take in context clues or go on a small Wikipedia hunt, you should come out the other side having enjoyed your time with the book.

It seems like foreknowledge of this book would add to the experience but I went in knowing nothing and still really enjoyed it. If you want to brush up head on over to http://en.wikipedia.org/wiki/T.H.U.N.D.E.R._Agents

Buy It – The writing is very strong especially in the characterizations. You may feel slightly lost as to continuity but just go with it and I promise what you come out with is a solid piece of comic book storytelling.