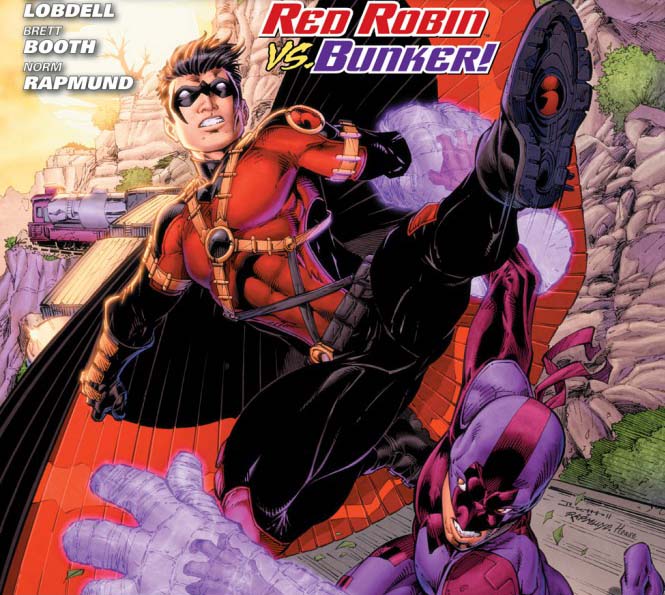 “Better to Burn Out…Than to Fade Away”

It is my firm belief that Teen Titans delivers the worst, most-hyped teaser at the end of its books with poor, cheap follow-through. At the conclusion of the premier issue, we were teased with Superboy! Issue #2 had literally ONE panel of the Kryptonian Klone and that was it. The end of that second book promised us the last face of the new Titans! And, well…

OK, so we do spend a fair amount of time with Bunker –a metahuman with psionic powers – as he rides a train with Red Robin and Skitter. I’m not sure if he’s our last team member, however. We also meet Solstice (powers, unknown as of yet) in the arms of Kid Flash, and it’s also uncertain what role she could or would play in the new Teen Titans.

Speaking of Kid Flash, I’m continuously impressed by the work done any time this kid is on the page. There’s an entire page early on outlining Bart Allen’s movement through teen-superhero prison and may have been one of the most exciting panels I’ve seen of the whole New 52. He’s drawn with so much energy that you feel his movements as your eye travels across the images. There were points where I smiled in wonder at how well this kid is executed and I’ve been captivated by every line on his pages.

This month’s Red Robin story was not quite as good as it has been, but I think mostly because he and Wonder Girl are operating separately for the time being. Bunker is kind of cool – a Psylock/Green Lantern hybrid in powers – and I like that he’s Latino, but Lobdell writes great chemistry for Red Robin and his first companion, and I missed it in this issue. Nothing in his storyline is bad by any means, but it’s just not as interesting as some of the stuff in the first two books have been. And not even near as awesome as Kid Flash’s stuff has been.

Next month promises a showdown with Superboy…I guess we’ll just have to wait and see what that entails. If young Bart Allen is anyway involved, I’ll be sure to be down!

Contrary to my whining (which I’m prone to do), I really like Teen Titans very much and think it has the potential to be friggin’ incredible. Moments of genius streak through this series and as these heroes get closer and closer together, I think we’ll see more than just a Flash of brilliance. Buy it.