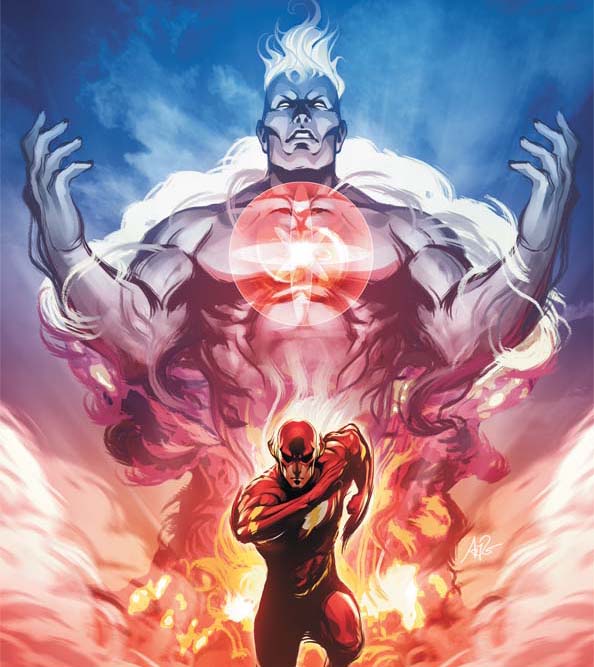 Written and Drawn by JT Krul and Freddie Williams II

So here’s the thing…I don’t hate Captain Atom. Some of the artwork, especially in this third issue, is beautiful and exemplary. Some of the themes the series tackles are worthy of being inked. Atom himself, while maybe not the most original of characters, has a strong, interesting voice. Unfortunately, Krul and Williams have little interest in tying anything together at this point in the storytelling – in fact, other than a constantly ticking clock sometimes found in the corner of panels, there’s little linking even these three books to each other.

After Captain Atom cured cancer in a little boy in Issue #2 (bizarre, I know), we switch gears and follow him to an Afghanistan-like country where Atom is joined by the Flash to take down some militant terrorists. Again, there’s some great art in this sequence, especially as Atom tries to absorb a nuclear bomb explosion, but like our cancerous preteen in the past issue, this action beat comes out of nowhere and begs the question: Where is this going?

Unfortunately, I don’t really care where Atom is going. Despite all of the pros of this series, the cons – primarily that Captain Atom is Dr. Manhattan from Watchmen – are that we’ve seen this character handled so much better in a myriad of different media. I’d rather pop in my Watchmen Blu-Ray and watch Billy Crudup give tremendous life to this character instead of flipping from one panel to the next following Atom through another adventure where he’s simultaneously pondering his godliness.

Unlike some of the other series I’ve three-strike’d (Superman, Red Hood and the Outlaws, Legion of Superheroes, Mister Terrific, Green Arrow and Men of War, so far), there’s nothing about Captain Atom that has drawn any kind of emotional response, good or bad. At all. It’s for this reason that I have to gear my attention toward something that’s going to move me out of the atomic indifference I’ve felt throughout three issues of Captain Atom.

While Captain Atom is better than mediocre, we’re not forging any trails with this book or this character. There is some beautiful artwork, but as we’ve answered many of the questions Atom raises with better developed characters, I’m simply not compelled to continue on the Captain’s meandering, occasionally nonsensical journey with him. Skip this series.