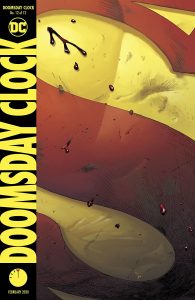 Everything matters and nothing matters. Every Crisis is critical yet none of them matter. There is but one constant in the DC universe and that is Superman and the multiverse will form around him. Although it took forever to get here at the end of the day Doomsday Clock #12 was well worth the wait. Maybe. I’ve been critical of DC as of late and I’m not about to apologize for that now. They have a continuity nightmare and much of that nightmare is due the delay of Doomsday Clock, an event that not only brought the heroes from Watchmen to the mainstream DC Universe but also promised lasting change to the entire line of DC comics. Yet in the delays of Doomsday Clock DC has moved forward, and the year ahead that Doomsday Clock was originally set in now doesn’t work with where the rest of the DC Universe is. Scott Snyder has evolved Lex Luthor to a first man, an Apex Predator in Justice League while Brian Michael Bendis skirted Doomsday Clock’s promised return of the Legion of Superheroes and brought the future super team back in the pages of Superman and now their own monthly book. So, when Doomsday Clock began two years ago it was the future of the DC Universe and if it had finished when originally planned everything else DC had planned with Snyder, Bendis, and even Tom King with the now concluded City of Bane in Batman #85. which also throws a wrench in the conclusion of Doomsday Clock, would have fallen perfectly in line but now some of the big reveals at the end of Doomsday Clock #12 just don’t resonate like they would have since they are no longer reveals. It feels mismanaged and poorly planned, considering how much emphasis was originally thrown behind this gorgeous spectacle of a comic and now it feels like an afterthought.

With that being said Doomsday Clock #12 is an absolutely beautiful finale of what has been an incredibly audacious series and a fitting ‘sequel’ to Watchmen. While I do have gripes with the timing and conflict Doomsday Clock presents to DC today, I immensely enjoyed this event. I put the books aside when the comics were delayed time and time again but as issue #12 approached, I sat down and reread the entire series and its ambition and beauty became even more apparent. Geoff Johns is often overlooked for his brilliance as he doesn’t write as much as he used to do to studio commitments but he is without a doubt one of the greatest writers of superheroes in the entire comics medium. His love and respect for the DC pantheon has always been apparent and he understands how this universe works and how it should always work. More importantly Johns understands how the DC multiverse works and that a Crisis is not always the answer to every continuity hiccup and a line wide reboot is rarely the answer. Instead DC already has the most wonderful answer to all these continuity headaches and it is their multiverse which is so much larger than 52 Earths. The DC Multiverse is infinite and by the end of Doomsday Clock #12 it is alive and vibrant as it continues to revolve its core, Superman. Superman is DC’s constant and it does not matter when he comes to earth is a rocket ship, just that he does arrive and when he comes a new earth will be born just as it has time and time again. Doctor Manhattan has also come to this conclusion as he realizes that all of his machinations and slight movements throughout the DC universe have not improved anything and thankfully as the DC universes moves toward a final Doomsday there is time to right the ship and create countless beautiful new universes that DC editorial can now play with. As the tensions of these twelve issues built to a global conflict with the heroes of the world pitted against each other, either with or against Superman culminates here it is the battle of strength and wills between Doctor Manhattan and Superman that is the core of this issue. Yet it isn’t the fight you expect and it’s the consequences that will have the lasting effects originally promised by this event. There are bits and pieces layered throughout this issue that will make every fan of DC comics happy as well as those along for the ride because of their love for Watchmen.

While many people thought that it was sacrilege for Geoff Johns to dare write Alan Moore’s iconic Watchmen characters into DC proper or that he even insinuate that he is at the same writing level as Moore was. I found that to be an idiotic stance. These are comic superheroes and Johns only showed love and respect for what Moore and his artist Dave Gibbons had done in their masterpiece in graphic fiction. Using Doctor Manhattan as the main antagonist to everything that has gone wrong in the DC universe over the past few years, as the master manipulator to all of the lost history that the New 52 attempted to reboot and Rebirth has been fixing since its start was genius. Now with Doomsday Clock completed DC has a new palate of universes to play with including their 5G universe with new takes on their classic pantheon but also their classic earth(s) where those interested in what DC has been and can always be can still find stories to be told. It may have taken a long time to conclude and it may no longer work with everything else that is going on in the DC Universe but then does it really matter…. These are just comics after all.

Verdict: Doomsday Clock #12 is a fitting conclusion to this ambitious yet chronically late maxi-series. It is a beautifully written and drawn piece of comic fiction that is a worthy successor to Watchmen and is a Buy for all fans of super hero comics.