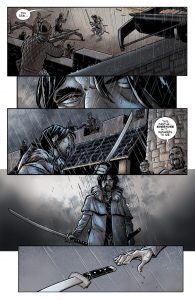 Everyone wants to be the new Game of Thrones, so often when describing new series both TV and comics, they compare it to GOT; but that is no easy feat. The Last Siege is one of those series that attempts to capital on Game of Thrones with some spaghetti western thrown in for good measure; however this issue certainly does not reach the heights of the series it is trying to ape.

The whole realm bar one kingdom/house is under the tyrannical rule of a ‘cruel’ king. Unfortunately for this house their lord is recently deceased and the heiress (Lady Cathryn) to the title is young, unmarried, and distraught (understandably so); which in a sudo-medieval society and setting is not a good combination. So, her advisors seek to remedy this situation by marrying her to an influential lord and thus creating a bit more stability. The story cuts to a foreigner in the local tavern, who is of course not all he might seem because a mysterious foreigner is always around the corner in adventure tales. This foreigner gets into a fight with Cathryn’s intended future husband (Feist); this takes up most of the comic with them spilling out into the dark and rainy town square; this though does help set up their characters mentalities as it shows Feist’s arrogance and the foreigners silent confidence. The comic ends with a twist as all good first issues do and you can see it coming from the beginning, but it is still an entertaining comic and plot that even though it is a cliché it feels natural instead of overdone. The end has a page of prose talking about a boy called Tomislav who is looking over a field of slain men. This addition helps expand the lore and scope of the comic as the story feels quite contained and there is very little exposition, with the King only being mentioned briefly. It gives the context of the history of this land and whilst the comic would be serviceable without the addition, it greatly aides the tale.

Walker keeps a tight focus on the few characters shown in this issue, as very little feels wasted, apart from the first five pages being an extended introduction to the foreigner as they are all literally establishing shots of him walking into town and setting the scene, which could have easily been done in 2, maximum 3 pages. However, there is no heavy exposition, with it feeling as if you are dropped into this world which is already existing, and you have to catch up; but there are enough explanations and information that you never feel lost about what is occurring. The plot is simple but effective as it feels like the beginning of a medieval tale or saga which could spin into intrigue and action. Walker does set up interesting ideas, but at this point, it feels all quite surface level and slightly cliched. Furthermore, it would be nice if the Lady Cathryn said a word or had a more active role, as even her advisor notes that she should have a say in her engagement. This will hopefully be remedied as whilst it is understandable she is upset and young, that does not mean that she would not have a voice, and the lack of speech means that she is left at the end of the comic with little to no discernible character outside being upset; so why should I route for her as heir? Despite these faults, the comic is a fun and fast read, that could become an enjoyable series.

Greenwood is able to create a cinematic feel with a real sense of motion and action. Which is good seeing as a minimum of two-thirds of the comic is a brawl. The pencils and lines are clean with some heavy inks in a light cartoon style whilst this might seem to run counter to the premise of a gritty medieval war story the solicitations promise; the shading and inking work to make the art feel rougher around the edges. Even if at times it feels a bit too stark with blank and less detailed backgrounds.

Wait and See. It’s an enjoyable action western mixed with the potential for some game of thrones medieval machinations. However, there was no hook that made this an instant buy; with a lot of clichés used in what is billed as a genre-twisting epic; Walker could easily develop into something great, but this first issue is average.