Ether #1 is a magical tale of scientist Boone Dias who travels through the Crossroads to reach the city of Agartha. It’s a quirky little book that juxtaposes an empirical scope within a world that has birds with teeth called The Bloody Screechers and bug compasses that point one to their destination should they ask.

Boone chats up his friend Glum, the gatekeeper at the Crossroads, and the relationship 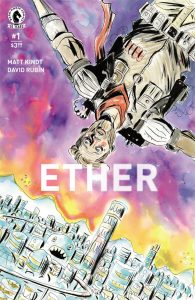 is immediately defined. The two know each other, but the absurdity that entails a scientist diving from magical realm to magical realm is elicited in the humor of the comic. For Boone Dias to reach Agartha he must be “ass kicked” into the city by Glum. The citizens of Agartha all share a similar oblivious outlook to simple problems.

Ether #1 is nearly childlike with the colors Rubín uses throughout the comic and the character designs are stunningly unique. Rubín really uses the world that Kindt has written and bursts it all onto the page as Glum and Dias running around the city to find the tragedy of Agartha. Kindt’s noir-like story really entices a reader because of the significance of the one who has died.

Glum is the Gatekeeper of Agartha at the crossroads, but he works at a “deputy” capacity which means something more powerful in ensuring Agartha’s safety. The murder-mystery occurring in Agartha draws a reader in, but the true story lies in when Dias ends up in the “real world.” There is a lecture about how magic isn’t real because what’s considered magic is just something that can’t be explained. Dias goes on to say that everything can be explained.

The world Kindt and Rubín built is an immersive, enchanted, and wonderfully rich one. It elicits wonder with art and colors by Rubín and a story that immediately engages one with its mystery. The richness of its mythology is sure to blend it’s magical and scientific layers to create an authentic experience of discovery whether it’s Dias’ observations or the reader’s understanding of Agartha or Dias.

Check it out. It’s a smart book packed with a lot to anchor to. The city of Agartha is gorgeous and the implications of mystery sitting in the center is enough to have readers coming back for more. The ending of the comic is a flashback, but one that hints at the larger mythology of Boone Dias who is already an interesting character. It’s a fun book and if you enjoy fantasy based exploration through the lens of a scientist then this is the book for you.