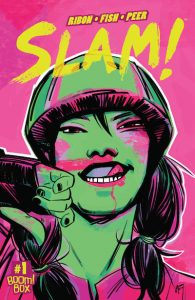 Women’s roller derby to me is a world that is as fascinating as it is intimidating, and one that I know I’ll never be apart of–partly due to my gender but mostly because I possess no real toughness of any kind. Thankfully, with the release of Slam #1 from Boom Studios, those like me that wish to live in that scene vicariously now have an avenue in which to do so. As it turns out, there’s a lot to this sport behind the bruises and broken bones, and writer Pamela Ribon crafts an excellent opening chapter that tackles issues of fear and self-doubt and the importance of perseverance and camaraderie among women. I know that all sounds super serious during a super serious time in all our collective lives, but trust me, this is above all else a delightful read from start to finish.

In this first issue, Ribon pulls the proverbial curtain back and takes readers backstage–quite literally–to two newbie roller derby gals, Jennifer (aka “Knockout”) and Maise (aka “Ithinka Can”) on the day of their first big match. Rather than spend much time on the action of the match itself (which is creatively explained as being a blur to the participants anyhow), Ribon frames the issue around both girls’ separate journeys to the league itself and the friendship that forms between them through a mutual need for the derby in their lives. It’s a very character-rich, backstory-heavy first issue to start, and that’s not a bad thing. By building these characters up right from the get go, Ribon sets the stage for the conundrum our heroines find themselves in at the end of the issue, and the result is something compelling to any reader, derby fan or not.

Another aspect of Slam #1 that’s sure to grab hold of any reader is Veronica Fish’s artwork. I know it’s been joked about before that Boom has a very recognizable “house style” (for lack of a better phrase) but there’s a reason for that:  it’s because it just works. Fish fits right in with that successful mold, drawing the characters as expressive and animated; although there’s some bone-breaking and bloody-nose inducing action happening here (which looks great as drawn by Fish, by the by), it’s all rendered with a great whimsy that these Boom Box imprint books all carry with them. Brittany Peer’s colors complete the look with a very bright aesthetic that comes alive, especially when the girls take to the rink.

Buy! Slam #1 offers a more personal journey into the world of women’s roller derby than I expected, but it’s one that I can easily recommend. Even if the subject matter doesn’t immediately grab your attention, the narrative by Ribbon and the amazing artwork from Fish is sure to take hold and not let go.