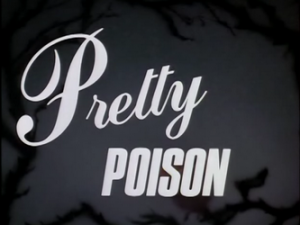 Synopsis: [from IMDB, see Link: here] When Harvey Dent is poisoned with derivative from an extinct flower, Batman must hunt down the assailant who has the antidote, the villainous plant fanatic Poison Ivy.

Pretty Poison, marks the first appearance of Poison Ivy and as 1997’s much maligned Batman and Robin demonstrated, getting Miss Isley ‘right’ is by no means an easy feat. The reality is, the character doesn’t necessarily operate as a traditional Batman rogue. With the ability to control plants, an immunity to poisons and imbued with a toxic kiss, Ivy appears as a much more fantasy or science fiction based villain worthy of Superman and the X-Men, as opposed to the gangsters and madmen that line the ranks of Batman’s rogues gallery.

Yet, Pretty Poison succeeds where Joel Schumacher’s big budget comic adaption completely fails. With a tight story and a careful approach to the villain’s presentation, the episode introduces the character brilliantly, capturing both the seductive and monstrous aspects that make the character so effective. The story focuses on Batman attempting to find a cure for his friend Harvey Dent (Pre-Two-Face), who has been poisoned while dining at a restaurant by a toxin derived from an incredibly rare plant. Batman’s investigation leads him straight into Dent’s new fiance, who it is revealed seeks to murder the new district attorney in revenge for the near extinction of several rare plants during the creation of a new maximum security prison.

The episode works as perhaps the definitive first meeting between Batman and Poison Ivy, presenting many of the best aspects that make up the character.  Alluring and at times full of malice, Pershing’s Ivy appears as standard the femme fatale, a trope that blends brilliantly with the series dark deco aesthetic due to its associations with the noir sub-genre of detective fiction. Here, Ivy is vengeful and psychotic, happily willing to murder Dent in response to his accidental destruction of the local plant life.  The design for Ivy here is the best one of the series, one that diverts away from more of the supernatural or fantastical elements that have rooted the character, instead focusing on a more grounded approach. By not going for the pixie look (as shown later in The New Batman Adventures) and instead focusing on a simple green tights design, this version provides us with an interpretation of the character that still pays homage to the character’s original comics look, while also keeping the character within the realms of the established aesthetic.

Which brings us to Ivy’s use of monstrous mutant plants. In earlier episodes, I’ve found issues with some of the writer’s still figuring out the limits to the universe they have created. Yet here, I can’t help but feel the creatures work within the confines of the story world. Appearing as if related to the alien plant in Little Shop of Horrors, they fit perfectly into the retro aesthetic established, particularly the sci-fi horror movies of the 1950s. The effect is something that fits better than other aspects, and while the faux-dinosaur shriek might be misplaced, the use of these monsters seems in someway linked to the original ‘mad-scientist’ tones established in the series’s opening episode.

One of the more impressive aspects of Pretty Poison is how tightly crafted the episode is. Jointly written by both Paul Dini and Michael Reeves, the episode introduces elements with a degree of subtlety, with not an line wasted. Although Batman’s reasons for suspecting Ivy are somewhat weak or vague (perhaps chalked down to Batman’s own intense paranoia than anything), when the episode tells us of Isley’s past as an activist, lecturer and biochemist for a leading cosmetics brand, it is all for a reason. It explains Ivy’s modus operadi of toxin based perfumes, as well as her collection of rare and at times monstrous plants.

What is also interesting is that in the Harvey Dent plot, this episode offers one of the few overarching stories throughout the series one-shot format. Whereas most episodes appear as simple standalone stories, this follows Harvey Dent’s appearance in On leather Wings and acts as a centre point before the characters eventual transformation into Two-Face. We particularly gain small but important insights into Bruce Wayne’s character, particularly his friendship with Dent. Here, we see a different side to Wayne, one that is dedicated to his friend and appears somewhat capable of sustaining some meaningful human relationship to someone who doesn’t know his secret identity. Albeit deceitful to a degree, Wayne appears genuinely concerned for his friend and its an interesting dynamic to add to the character, one that will eventually pay off in the Two-Face 2 parter.

Alongside the writing, Pretty Poison boasts some of the best animation seen since the original episode, with Batman’s dramatic face-off against Ivy and her plant creatures, as well as the subsequent raising of her greenhouse being particularly notable for their excellence. Not only that, the score, composed by Shirley Walker, is particularly good, providing drama and creeps when called upon. The episode is not without comedy either, with Harvey Bullock’s interrogation of the restaurant staff particularly providing moments of light relief within the drama of the episode.

In closing, Pretty Poison, marks a fairly decent return to form for the initial run of episodes in the series. By offering a tight story, complete with great characterization and animation, the episode demonstrates many of the aspects that will become hallmarks of the series quality. Not only this, with its rendition of Poison Ivy, the show’s creators are able to successfully brings to life an competent and effective version of a character that is incredibly difficult to interpret successfully.

Footnote: The prison that Harvey Dent has built is named “Stonegate Prison.” In the comics, the standard prison in Gotham is that of “Blackgate Prison.” The reason for this change is unknown, but I would imagine there is a specific reason for the writers to choose this.